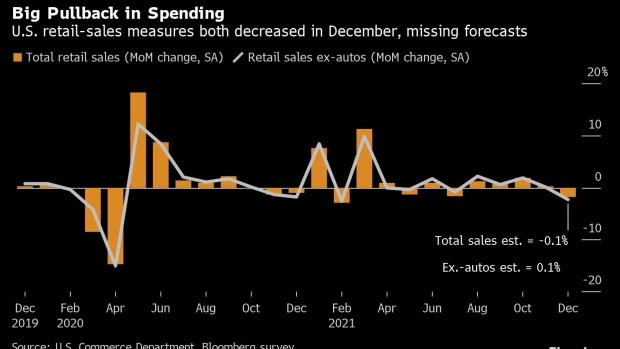 (Bloomberg) -- U.S. retail sales stumbled at the end of 2021, factory output weakened and consumer sentiment deteriorated at the start of the new year, illustrating a loss of traction for the economy that many analysts view as temporary.

Friday’s data deluge showed how lingering shipping challenges, supply and labor constraints, the fastest inflation in decades and the omicron variant are weighing on activity.

The value of retail receipts slumped 1.9% slump in December, worse than most estimates. Still, economists pointed out that demand was pulled forward to prior months as consumers snapped up merchandise for holiday gift-giving earlier than usual.

“This is clearly not a great start to 2022,” Jefferies LLC economists Aneta Markowska and Thomas Simons said in a note. “That said, we remain constructive on the consumer for this year.”

That’s because households “have enough firepower -- in the form of cash savings and bargaining power -- to support a rebound in spending” after omicron’s effects fade, they said. Also, employment gains and wage growth should provide even more spending support.

“Earlier strength in the data -- Americans did their holiday shopping in October -- remains consistent with a healthy pick-up in 4Q economic growth...” Furthermore “with Covid case counts already peaking in the middle of the month, our analysis suggests the pullback will be short-lived.”

At the same time, inflation is taking a toll. The University of Michigan’s preliminary January consumer sentiment index fell to the second-lowest reading in a decade, while the Federal Reserve data showed production at the nation’s manufacturers unexpectedly fell 0.3% last month.

A Bloomberg monthly survey of economists, conducted before the latest economic data, showed household spending is forecast to expand at a 2.5% annualized pace in the first quarter. That’s a 0.5 percentage point downgrade from the previous month’s reading and about half as fast at the expected rate in the prior quarter.

The drop in December retail sales was broad, with 10 of 13 major retail categories declining. Still, there’s a caveat.

At the tail end of the holiday-shopping season, December is traditionally a solid month for retail sales. However, concerns about shipping delays prompted many consumers to shop earlier than usual to ensure gifts arrived on time. Because the figures are adjusted for seasonal variations, the earlier shopping probably contributed to the weaker-than-expected figures.

Meantime, the Michigan survey of consumers showed the impact of higher inflation on sentiment and to some extent, the spread of the coronavirus. Respondents said they expect prices to rise 4.9% over the next year, matching the highest since 2008. Inflation over the next five to 10 years is seen climbing at an annual pace of 3.1%, the most since 2011.

That’s depressing attitudes about personal finances. When asked about their finances, 33% reported being worse off than a year ago, just above the April 2020 shutdown level of 32%. It’s even starker among cash-strapped families: twice as many households with incomes in the bottom third as in the top third reported worsening finances, the report said.

While omicron’s impact likely played a role, “our take is that inflation is the more warranted concern with prices rising the fastest pace in nearly 40 years,” Wells Fargo & Co. economists Tim Quinlan and Sara Cotsakis said in a report.

Factory activity also took at hit last month as the surge in infections exacerbated manufacturers’ ongoing struggles with material and labor shortages. The Fed’s figures underscore the long, slow path to normalizing the mismatch in supply and demand in the goods sector.

Omicron is just the latest hurdle, as factory floor managers navigate the fallout of the spike in cases on workers and production schedules.

Even so, looking ahead, lean inventories, elevated order backlogs and sustained growth in consumer and business demand are poised to offer a tailwind to production this year.