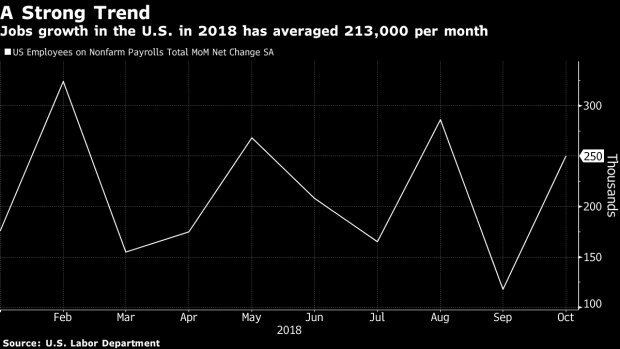 (Bloomberg) -- U.S. employers probably kept up a robust pace of hiring in November that was closer to the 2018 trend rate after hurricanes distorted data for the prior two months.

Nonfarm payrolls rose 198,000, according to the median of estimates in Bloomberg’s survey of economists before the Labor Department releases its monthly employment report Friday at 8:30 a.m. in Washington. While that’s well below the 250,000 increase in October, it’s close to the 210,000 average over the past 12 months.

Economists also project average hourly earnings will post a solid 3.1 percent gain from a year earlier. Such a pace would match October’s increase, which was the fastest since 2009.

Here’s what some economists expect from the report:

He noted a variety of wage measures inching up in recent months. “Against a tight labor market, combined with Amazon increasing its minimum wage last month, we look for average hourly earnings to rise 0.3 percent in November. If realized, that would take the annual rate to 3.2 percent -- the fastest annual pace in nearly a decade.”

Chief Economist Diane Swonk projects 185,000 new jobs. “We expect to see solid job creation but it will appear weaker month-on-month compared to the distortions in October’s data,” she said. “Our forecast shows average hourly earnings up 0.2 percent for November, which would translate to a 3.1 percent gain on a year-over-year basis.”

“The jobs report is shaping up to be hawkish across the board,” wrote strategist Michael Hanson, who forecast 215,000 jobs. He said employment growth will likely revert to trend and “remain strong in line with the resilience seen in job surveys, from regional Fed surveys to ISM indicators which on balance remain consistent with payrolls running at a +200k pace.”

On wages, Hanson expects a 0.3 percent gain from the prior month, helped by recent pay increases at Amazon.com Inc., and 3.2 percent year-on-year growth.

“One source of strength in November could be the retail sector,” wrote Omair Sharif, senior U.S. economist, who predicted 230,000 new jobs. He cited a jump in the industry’s job openings from a year earlier and said if that and “additional wage and other perks are any indication, retailers likely boosted hiring heading into November.”

Sharif sees average hourly earnings rising 0.3 percent from the prior month and 3.2 percent on an annual basis.

“Strong growth earlier this year should ensure the economy creates jobs at a robust pace into year-end,” economists Yelena Shulyatyeva, Tim Mahedy and Carl Riccadonna wrote in a note. “The composition of job gains will provide clues on which sectors will drive hiring in 2019. As the Fed continues to tighten policy, the housing and auto sectors will likely get hit by rising interest rates.”

Bloomberg Economics projects a payroll gain of 240,000 and a 0.2 percent rise in average hourly earnings from the prior month.

--With assistance from Shobhana Chandra.

To contact the editors responsible for this story: Brendan Murray at brmurray@bloomberg.net, Jeff Kearns, Scott Lanman