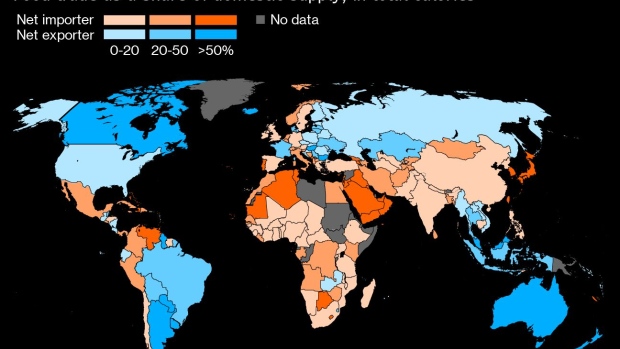 (Bloomberg) -- When it comes to bread, the conversation can become politically charged very quickly.

From the French Revolution to the Arab Spring, price rises and food shortages have fueled conflict, toppled leaders and overthrown regimes.

In the throes of a once-in-a-century pandemic, the headlines in many wealthier nations scream of empty supermarket shelves, of panic buying or the sudden sourdough craze among middle-class home bakers. Poorer nations like Ukraine, a major breadbasket, have limited grain exports and Vietnam, the world’s third-largest shipper of rice, has barred exports of its signature commodity.

The coronavirus has done more than disrupt supply chains, it’s restarted a discussion about self-sufficiency tinged with nationalism. At least 10 countries have introduced restrictions on overseas sales of grains or rice since mid-March, according to the International Food Policy Research Institute tracker, and while many of those actions might not stick, that such threats were made at all serves as a wake-up call to governments.

As Joseph Glauber, senior research fellow at the Washington-based IFPRI, put it: “Food is a pretty emotional topic when there is not enough of it.”

And even for some developed economies that depend heavily on rice or grain imports, like the islands of Singapore or the U.K., the problem could become even more politically pressing. “Being rich is no longer a guarantee that you will be able to get the supply you want on difficult markets,” said Tim Benton, research director in emerging risks at think tank Chatham House in London.

Food experts agree that as things stand there’s more than enough grain in the world and stockpiles of key staples. What’s causing some shortages of products such as pasta in retail outlets are distribution bottlenecks triggered by lockdowns. The scare, however, may encourage some nations to further boost their agricultural sector.

Tim Lang, professor of food policy at London’s City University, sounded the alarm in his 2020 book “Feeding Britain” that the U.K. has a flawed system where it imports vast amounts of crops it could be growing. Singapore has said it will set up a task force to increase local food production by 2030.

“We are going to see more nationalistic food systems and attempts at food self-sufficiency,” said Rami Zurayk, a professor at the American University of Beirut. “But I think that’s mostly political, sending signals to people that the state is actively seeking to protect them and is doing all it can to ensure food security. For many countries food self-sufficiency is elusive.”

The last time the concept of “food sovereignty” was evoked was during the food crises a decade ago, when arid countries like Qatar and Saudi Arabia found that vast financial reserves built from oil sales didn’t guarantee access to food. Now, nationalists are eyeing an opportunity to score points.

With multilateralism under siege, and populist leaders overseeing agricultural powerhouses from Brazil to India, the potential is for the debate to keep picking up steam. In Canada, the self-described Quebec nationalist and premier of the province is making noise about growing fruit and vegetables at home to become more autonomous.

A group of food industry figures has urged countries to keep trade flows open in an effort to prevent global hunger growing considerably, while the United Nations has said states should work together to avoid “beggar-thy-neighbor policies.”

There is also a political logic to why many countries are dialing up the rhetoric of holding back food.

Romania and Kazakhstan are former communist nations that have boosted their grain exports in recent years, but talk of keeping food at home still strikes a chord because of the memories of food scarcity during communism and the early 1990s.

The chest-thumping is happening against a backdrop where the world’s big hitters appear to be looking out for themselves. U.S. President Donald Trump has blamed China for not doing enough to stop the spread of the virus and even before Covid-19, protectionism was a common refrain. And there are reasons to worry about food security.

In the three years through 2010, when big grain exporters like Russia panicked about food supplies and limited exports in response to harvest failures, it led to price surges.

Political and economic instability ignited across Africa and Asia as people struggled to cope; and the Arab uprisings swept through the Middle East, ultimately leading to the refugee crisis that upended traditional politics and boosted anti-establishment forces in Europe and beyond. Malnutrition spread.

The European Union’s trade chief Phil Hogan recently did away with diplomatic niceties during a video conference with Group of  20 counterparts after Russia proposed to curb shipments abroad to ensure domestic supplies: “There is no global supply shortage at this time and such measures are completely unjustified.”

That was in March. This month, EU trade ministers are debating how to advance the bloc’s “strategic autonomy” and European Commission President Ursula von der Leyen is talking about reducing dependency by “shortening and diversifying supply chains.”

Uncomfortable conversations are only just beginning.