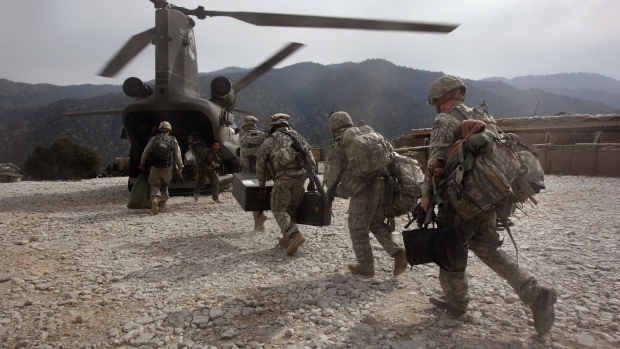 KORENGAL VALLEY, AFGHANISTAN - OCTOBER 27: U.S. soldiers board an Army Chinook transport helicopter after it brought fresh soldiers and supplies to the Korengal Outpost on October 27, 2008 in the Korengal Valley, Afghanistan. The military spends huge effort and money to fly in supplies to soldiers of the 1-26 Infantry based in the Korengal Valley, site of some of the fiercest fighting of the Afghan war. The unpaved road into the remote area is bad and will become more treacherous with the onset of winter. (Photo by John Moore/Getty Images) , Photographer: John Moore/Getty Images AsiaPac

(Bloomberg) -- The Biden administration has asked Congress for $1 billion to bring Afghans who helped American forces during the two-decade war in their country to the U.S., and there is bipartisan support to provide the money, according to people familiar with the matter.

The money would be included in an emergency measure chiefly intended to provide heightened security on Capitol Hill and to reimburse the U.S. Capitol Police and the National Guard for expenses related to the Jan. 6 riot by supporters of then-President Donald Trump.

Negotiators were rushing on Monday night to complete the legislation so the Capitol Police can avoid furloughs next month. Senate Appropriations Committee chairman Patrick Leahy, a Vermont Democrat, and the panel’s top Republican, Richard Shelby of Alabama, are trying to close a deal on the supplemental spending bill that would allow for votes in the House and Senate later this week

The fate of the Afghans who aided U.S. troops in Afghanistan has taken on greater urgency as Taliban militants have seized the momentum in their long campaign to return to power. With the withdrawal of most American forces nearly complete, it is feared that anyone who worked with them in the long conflict could be singled out for retribution by the Taliban or other militant groups.

The $1 billion would be divided between the Defense Department, the State Department, with $25 million going to the Health and Human Services Office of Refugee Resettlement.

The funds would cover the cost of temporary shelter, resettlement and other necessities, according to a third person familiar with the matter. The White House made the request last Friday, but it was not accompanied by a detailed plan, one of the people said.