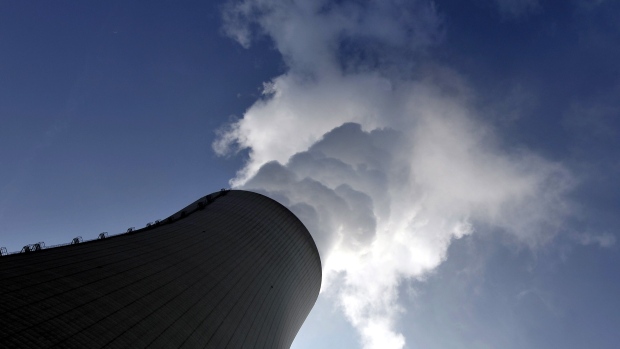 (Bloomberg) -- The Biden administration is backing federal subsidies to keep U.S. nuclear power plants in operation as part of its infrastructure proposal, a move that is sure to set up a clash with environmentalists who have qualms with the carbon-free fuel source.

White House officials have told supporters in the industry and on the Hill it would like to see a nuclear production tax credit included in the $2.25 trillion infrastructure package it proposed in March, according to a person familiar with the matter who asked not to be identified discussing private conversations.

The support comes as the industry, which provides about 19% of the nation’s electricity, has been beset by a wave of reactor closures as it struggles to compete with electricity produced from natural gas.

But nuclear power is also loathe to some of the very same progressives and environmentalists who are pushing the administration to act aggressively to combat climate change. Among their concerns are radioactive waste, the environmental effects of uranium mining, and concern about nuclear accidents.

“A bailout for existing reactors is wrong for the climate and wrong for consumers,” said Lukas Ross, program manager at Friends of the Earth, a progressive environmental group based in Washington. “Congress and the Biden administration should not throw good money after bad investments.”

A tax credit for nuclear plants could be a boon for nuclear operators such as Southern Co. and Exelon Corp., as well as for uranium miners like Lakewood, Colorado-based Energy Fuels, Inc. It has been endorsed by both congressional Republicans, as well as the Trump administration, which sought ways to help the nuclear industry.

Backers include the Nuclear Energy Institute, which has for years sought a tax credit for nuclear, and last year said a 30% investment tax credit was needed to help the industry weather “severe financial strain” wrought by the pandemic.

The White House’s support of a tax credit for nuclear was earlier reported by Reuters, which said nuclear plants would need to prove financial hardship to qualify for the credit and would not be able to receive both state and federal subsidies.

Senator Joe Manchin, a West Virginia Democrat who chairs the Senate Energy and Natural Resources Committee and serves as a powerful swing vote, backs the incentive, among other ways to help the nuclear industry, according to a person familiar.

With the closing of Entergy Corp.’s Indian Point nuclear power plant in New York last month, the number of nuclear reactors operating in the U.S. has fallen to 93 from 104 two decades ago. Without any policy changes, more than half of the nation’s nuclear fleet will retire by 2030, according to report earlier this year by the Rhodium Group.

“To date, the Biden Administration has kept an arms-length from existing nuclear,” Height Securities LLC said in a note to clients Wednesday, adding the White House’s support “significantly increase the odds of inclusion in the upcoming infrastructure bill” despite expected pushback from environmentalists.