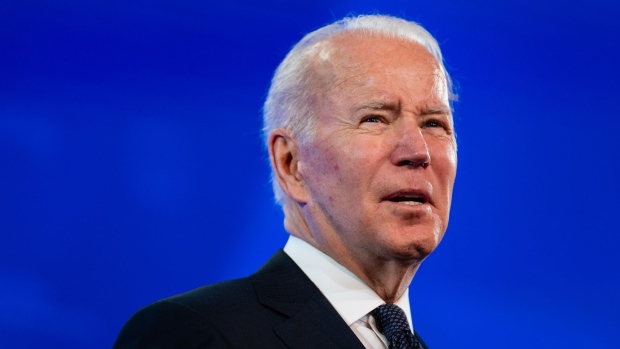 (Bloomberg) -- The Biden administration is preparing to release an initial government-wide strategy for digital assets as soon as next month and task federal agencies with assessing the risks and opportunities that they pose, according to people familiar with the matter.

Senior administration officials have held multiple meetings on the plan, which is being drafted as an executive order, said the people. The directive, which would be presented to President Joe Biden in the coming weeks, puts the White House at the center of Washington’s efforts to deal with cryptocurrencies.

Federal agencies have taken a scatter-shot approach to digital assets over the past several years and Biden’s team is facing pressure to lead on the issue. Industry executives often bemoan what they say is a lack of clarity on U.S. rules and others worry that an embrace by China and other nations of government-backed coins could threaten the dollar’s dominance.

The Biden administration’s increased focus comes at a time of broad consumer interest in the volatile crypto market. Bitcoin, the biggest and most liquid cryptocurrency, fell below $37,000 on Friday, compared with an all-time high of nearly $69,000 in November.

The late-stage draft of the executive order details economic, regulatory and national security challenges posed by cryptocurrencies, said the people who asked not to be named discussing internal deliberations. It would call for reports from various agencies due in the second half of 2022.

One such study would come from the Financial Stability Oversight Council, a group that includes the heads of Washington’s top financial watchdogs, looking at the possible systemic impacts of digital assets. Another government report would look at illicit uses of the virtual coins.

Meanwhile, the directive would also require other agencies to weigh in -- carving out roles for everyone from the State Department to the Commerce Department. Some of those tasks will be meant to ensure that the U.S. remains competitive as the world increasingly adopts digital assets.

The administration’s plan, including the directives in the order, could be further modified before it’s finalized, the people cautioned.

The administration is also expected to weigh in on the possibility of the U.S. issuing a government-backed coin, known as a central bank digital currency or CBDC, the people familiar with the talks said. But, according to one of the people, the administration is likely to hold off on taking a firm position, as the Federal Reserve is still considering the issue. On Thursday, the Fed released a preliminary paper on the matter and opened a public comment period through May 20.

A CBDC could be a way for the U.S. to stay competitive with the explosive growth of private cryptocurrencies and coins produced by other nations, including China. The Fed said it does not intend to move forward without the support of the White House and Congress.