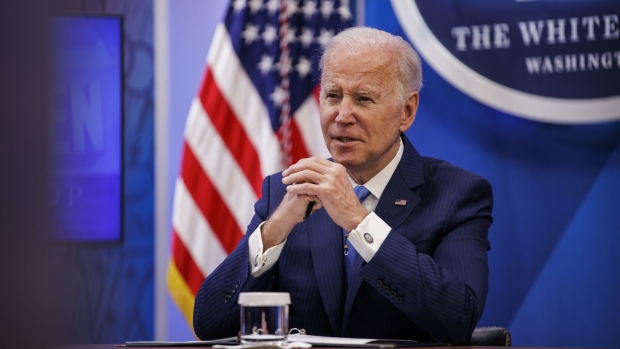 U.S. President Joe Biden speaks while meeting with small business owners in the Eisenhower Executive Office Building in Washington, D.C., U.S., on Thursday, April 28, 2022. Biden is expected to discuss the "small business boom" during Biden's term in office according to the White House. , Bloomberg

The roughly one-hour meeting with more than 20 industry representatives was designed to shed light on President Joe Biden’s move last week to bolster domestic solar manufacturing under the Defense Production Act, said several people familiar with the session. They asked for anonymity because the virtual meeting was not public.

White House officials, including Deputy National Climate Advisor Ali Zaidi, who ran the session, said the meeting was just the start of efforts to work with the industry to ensure more solar panels are made in the US. They said the Defense Production Act move is just one tool in a toolbox the administration will use as it seeks to expand the solar supply chain.

That didn’t reassure manufacturers with questions about the lack of funding behind the president’s declaration. Biden’s move was paired with a two-year waiver of new duties on solar imports from four Southeast Asian nations in a bid to neutralize a trade dispute that has chilled renewable projects across the US.

Samantha Sloan, vice president of global policy at First Solar Inc., said the meeting “only served to underscore the concerning disconnect between solar manufacturing realities and the administration’s understanding of key issues.”

The meeting “did not result in any alignment on the path forward,” Sloan said by email.

A White House official said the meeting reflected the administration’s commitment to quickly bring online new clean energy manufacturing in the US.

Participants stressed the urgency of spurring such projects amid the climate crisis and highlighted the opportunity to ensure the technology they depend on is made in America, the White House official said.

The Zoom-based meeting included a representative of Jinko Solar Co., a China-based manufacturer with a plant in Florida as well as factories throughout Asia that could have faced expanded tariffs under a recent trade probe, said two people familiar with the discussion.

Representatives of several other solar manufacturers were included, such as Hanwha Q Cells Co. and Auxin Solar Inc., the California-based company that successfully petitioned the Commerce Department to open the investigation. Major solar trade groups that fought the probe were also present.

Manufacturers pushed White House officials for details about how the president’s executive action will catalyze new government support for domestic panel factories, given the funding constraints, the people said. Manufacturers also pressed the administration to do more to push legislation through Congress expanding tax incentives for renewable projects and clean-energy manufacturing.