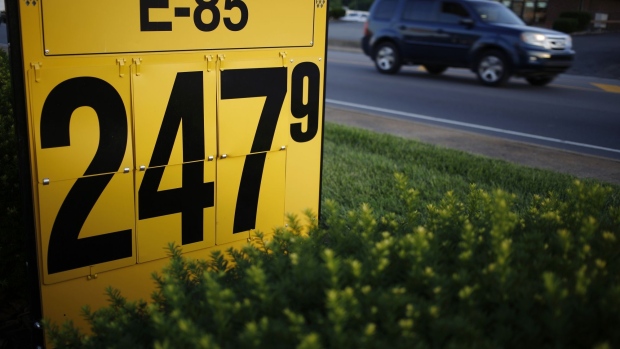 Grain rail cars sit on tracks at the POET LLC ethanol biorefinery in Gowrie, Iowa, U.S., on Friday, May 17, 2019. Stockpiles of U.S. corn ethanol sank to the smallest since July even as production of the biofuel climbed, Department of Energy data showed on Wednesday. , Bloomberg

(Bloomberg) -- Trump administration officials are set to meet with renewable fuel producers on Wednesday, as they seek to entice industry endorsements for a plan to bolster corn-based ethanol and soy-based biodiesel.

The meeting is slated to include executives from Louis Dreyfus Co., Renewable Biofuels Inc., and Renewable Energy Group Inc., said people familiar with the matter, who asked not to be named discussing private negotiations. Ethanol and biodiesel industry trade associations are not expected to be present.

Administration officials also are consulting with oil refineries as they seek to finalize a broad plan for boosting U.S. biofuel-blending mandates and taking other steps to propel renewable fuels made from corn and soybeans. President Donald Trump on Aug. 29 promised he would soon unveil a “giant package” of biofuel changes that would make farmers “so happy.”

The effort responds to a backlash in the American Midwest over the Environmental Protection Agency’s decisions to exempt oil refineries from annual requirements to use biofuel.

Although federal law authorizes those waivers for small refineries facing an economic hardship from the mandates, renewable fuel supporters say the Trump administration has handed them out too freely -- dealing a blow to agricultural interests already suffering amid the trade fight with China and a tough growing season.

After weeks of talks, administration officials have agreed they will not seek to rescind a batch of recently granted waivers exempting oil refineries from 2018 biofuel-blending mandates.

However, they tentatively decided to begin accounting for them in 2021 blending quotas -- a move would effectively force non-exempted refineries to satisfy targets expected to be waived for other facilities. Administration officials also are considering giving a 5% boost to U.S. renewable fuel-blending quotas in 2020.

Biofuel advocates -- including trade associations, ethanol producers and Midwest lawmakers -- have been cool to the plan, saying the reallocation of waived quotas should happen at least a year earlier, in 2020. That has complicated the White House’s efforts to reach a deal.

The issue underscores a clash between two key Trump constituencies -- agriculture and oil -- heading into the 2020 election. Oil industry advocates and labor unions have been appealing to the White House not to alter course, arguing the hardship waivers are essential to keeping small refineries running.

Refinery workers and labor groups are set to hold a rally over the issue in the battleground state of Ohio on Thursday, emphasizing that Trump’s decisions on biofuel could cost him votes in the Rust Belt -- not just the heartland.

--With assistance from Jennifer Jacobs.

To contact the reporters on this story: Mario Parker in Chicago at mparker22@bloomberg.net;Jennifer A. Dlouhy in Washington at jdlouhy1@bloomberg.net