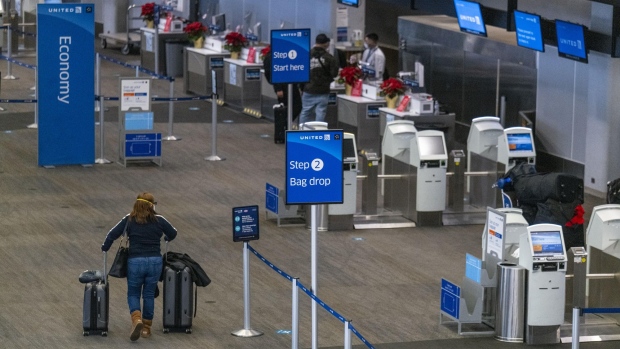 (Bloomberg Opinion) -- Does the airline industry have a rubber room?

That was the name given to the place where teachers that New York City wanted to fire gathered each day; they collected a paycheck for doing absolutely nothing. The airlines are set to collect $15 billion as part of the new $900 billion Covid-19 relief package. The money is being described as “payroll reimbursement,” meaning that Congress intends it to be used to bring back the 32,000 workers the airlines laid off at the end of September, when the last airline relief package expired. But what are those workers going to do?

Thanks to the pandemic, airline traffic is down a staggering two-thirds, and the International Air Transport Association says it won’t fully recover until 2024. The number of scheduled flights has been reduced by more than 40% worldwide. And even those flights that are still running are often half empty; Delta Air Lines Inc., for instance, isn’t booking any middle seats to maintain social distancing. Bringing back laid-off airline workers isn’t going to change any of those stark facts.

What’s more, as Bloomberg Intelligence analyst George Ferguson points out, the main U.S. carriers have enough capital to get them into 2022 even if they didn’t receive another dime in federal relief. Ferguson estimates that Delta will get $3.3 billion from the relief package, which, he writes, “would boost the carrier’s staying power. The grants would add to our year-end expectation of $16.5 billion in liquidity.” (It’s worth noting that Delta did not lay off any employees, though it reduced its payroll through buyouts and voluntary unpaid leaves.)

United Airlines Holdings Inc. and American Airlines Group Inc., which laid off the vast majority of those 32,000 employees, are both burning between $25 million and $30 million in cash a day — but each has more than $15 billion in liquidity. United has said it will recall its laid-off workers — but it also assumes that business conditions won’t improve, so it expects to lay them off again in March, once the relief deadline expires.

Here’s one more useful fact. Do you know what you get when you divide $15 billion by 32,000? The answer is $468,750. That’s right: The American taxpayer is putting up almost $500,000 for each airline worker to have three months worth of employment.

If you are thinking that this doesn’t seem to make a lot of sense, you’re right. I don’t begrudge anyone getting aid in these difficult times, but let’s take a minute to compare the airline industry with the restaurant business. Restaurants, which employ more people than airlines, are in terrible trouble; Bloomberg News reported in early December that 110,000 restaurants have closed for good — “and more pain is ahead.” The industry estimates that 2.1 million restaurant workers have lost their jobs.

In the first Covid-19 relief bill, restaurants were eligible for the Paycheck Protection Program — but they had to compete with every other small business in the U.S. Many of them received no relief, while others discovered that PPP didn’t really work for restaurateurs because many of their employees make most of their money from tips.

After the PPP fiasco, a group of local restaurateurs formed the Independent Restaurant Coalition. The group put together a bill (the RESTAURANTS Act(1)), which calls for providing $120 billion in relief — and would do so by making up the difference in revenue between 2019 and 2020.

The House passed the bill in early October, and according to Andrew Rigie, the head of the New York City Hospitality Alliance, it had more than 50 co-sponsors in the Senate. But it couldn’t get past Senate Majority Leader Mitch McConnell, who was more interested in pushing a tax break for business dinners. The three-martini lunch tax break is the only “relief” the restaurant industry got in the relief package.

When I spoke to Rigie, he didn’t mince words. “It’s disgraceful,” he said. “Big corporations that don’t need the money get billions, while struggling small businesses that are the lifeblood of cities get nothing.” He’s right, of course. Airlines have powerful lobbyists and make campaign contributions. And legislators spend a lot of time flying to and from their home states, so they are heavily invested in the airlines’ survival — and susceptible to the industry’s pleas for help.

Restaurants don’t have that kind of influence, so they are largely left to fend for themselves. Airlines can get money to bring back employees even when they have no work for them to do. Restaurants can’t get money even though they would have a far better chance of being able to actually put their recalled employees to work. In any case, the pandemic will end one day. When it does, you’ll be able to fly anywhere you want — but good luck finding a good place to eat.