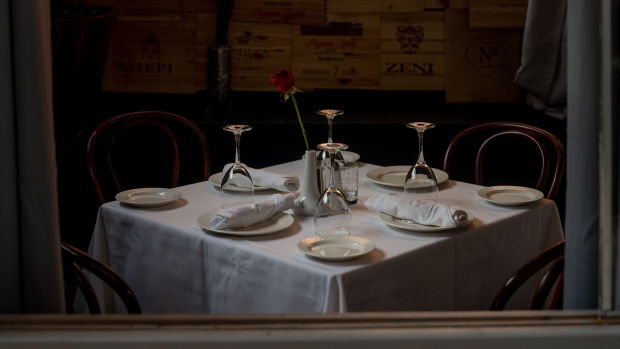 (Bloomberg) -- When Resy launched in 2014, the online restaurant reservation business was dominated by one company, OpenTable Inc. Resy innovated the landscape, adding features like ‘Notify’ to put users on a waiting list, and partnering with Airbnb Inc to book restaurants. In May 2019, a person familiar with the transaction confirmed Resy was sold to American Express for about $200 million.

At the time of the acquisition, the company had 4,000 restaurants on its roster. It has since tripled that number, to 12,000 dining spots, while hosting events like Resy Drive-Thru, a Covid-safe way to experience a 10-course tasting menu.

Resy was co-founded by Ben Leventhal. The now 42-year-old was already celebrated in the restaurant industry for helping to launch the seminal food news site Eater in 2005. Leventhal stepped back from Resy in December 2020, and is now adviser to the AmEx global dining team. But anyone who knows Leventhal knows he’s on the hunt for the next big thing. Bloomberg DINE founder Peter Elliot caught up with him on Zoom in mid-October. Comments have been edited and condensed.

Elliot: We’re seeing startups for everything from food sourcing to delivery. If you were to put on your investor hat, are any of these viable?

Leventhal: What you have to ask is, are any of them addressing and truly solving problems? Have any of them identified a pain point and then, are they really solving it? If they’ve checked those boxes, yes it’s a pain point; yes it solves a problem. And then you take it to the next level: Is it easy to implement and maintain? Then yes, to some extent some solution may emerge and some may be viable.

Elliot: Wasn’t Resy a great disrupter in that sense?

Leventhal: No. I think the reason for Resy’s success was because we tried very hard not to disrupt. We bent over backwards to integrate Resy workflows into whatever the restaurants had in terms of existing operations, steps of service, restaurant roles, without creating additional operating overhead. You can’t ask restaurants to do too much differently, especially these days when nothing feels like it used to anyway.

Leventhal: Uber Eats, GrubHub, DoorDash, however, have enormous, I mean enormous banks of customers and tons and tons of demand, all of which sits in the confines of those services. And that means they might generate new revenue streams for restaurants that work with them. That’s the reason it could work.

During the pandemic, that was the niche that got filled – at just the time restaurants were desperate to have new revenue. So far we’re not seeing a whole lot of those customers or their money flow to the restaurants. That’s a big problem. We may, and we could see a solution and there’s no reason to believe that relationship won’t work in a way that’s mutually beneficial.

Elliot: Who’s winning so far and why?

Leventhal: The restaurants that serve simpler foods that travel best fit in better with those platforms. That’s straightforward. After that it gets complex. What we’re discovering is what type of food and what type of brand works best for delivery on a large scale. And it won’t be everything. And there will be some bifurcation in the market to some set of restaurants who work out delivery and some set who don’t. Or to put it another way – there’s a reason some virtual burger chain isn’t going to go into the 4-star restaurant business and a reason why Daniel Boulud isn’t going into the delivery business.

Elliot: You’re the guy who made Resy. For some of us, the hope was getting a reservation would become easier. And yet, when I look for a table at Saint Theo’s, it’s booked and all the prime time slots are gone. Why?

Elliot: C’mon – it doesn’t improve the technology if no one really ever opens up the 7.30 table. Doesn’t it still remain stubbornly in the category of ‘telephone replacement’? Where are we going with digital restaurant reservations?

Leventhal: Hah! OK. Let’s step back. Historically, I would argue that you’d secure a reservation at a prime restaurant by low fi means; call, you might send a text, you might send an email but mostly you just got on the phone. From a macro perspective a lot more people are making a lot more reservations online. That’s just fact. Now, that hasn’t stopped restaurants from wanting to have very, very granular control of their most premium tables. I’m not delusional.

I’d say that’s not a reflection on the technology, a high touch owner wants high touch control. There’s only so much we can expect the technology to do at high scale. We can look at all of the numbers in terms of volume, in terms of engagement, and they are high and growing quickly. There’s no question we’re seeing an increase of adoption of digital reservations.

Elliot: So how do you get reservations?

Leventhal: If I’m visiting a new market? I might DM someone on Instagram, I might send an email. None of that is a telephone. But you know what I do most? I now use the Notify feature on Resy a ton and it more or less mimics the same process we used to go through to get a premium table at a premium time. I have three to five restaurants on notify as we speak and I expect all of them to come through. OK, you have to be patient. But it works. You have to look at the aggregate. Are you using the phone more or less (to make reservations)? Even for you the answer will be yes.

Elliot: What I don’t understand is given my spend at restaurants and Resy’s relationship with AmEx (95% of my restaurant spending is on an Amex card) then why isn’t there some algorithm that just says “give him the table?”

Leventhal: Because restaurants remain – to our point – low tech. You’re talking about the kind of engineering work of a Facebook or an Amazon that’s taken 30 years to make and we’re just getting started. Amazon used to sell books. And I have news for you, yes, your Uber score may be high and that may mean you get a nicer car, but in the end?

Even you and I aren’t in the top percentile to make that kind of technical decision on spending in a restaurant. At least not yet. Is that where it’s going? Yes, but so long as restaurants remain low-profit enterprises, this sort of change comes much more conservatively.

Elliot: Crystal ball time. Given your experience in the restaurant/hospitality space, can you tell us where you think we’re going?

Leventhal: The restaurant industry is in a complete and total period of reinvention. I think strong branded independent restaurants have their brightest days ahead. We’re going to see the more established, largest scale restaurants become what I would call restaurant superstores – they will make money in lots of different ways, not just by serving food on a plate at a table.

Elliot: Do you mean Major Food Group’s Carbone branching out to other cities?

Leventhal: Yes, that too – what I mean though is more what you’re seeing, for example with Carbone’s tomato sauce, or Momofuku moving into the consumer packaged goods (CPG) business. Restaurants have tried in the past but didn’t have the kind of resources to back them up – Major does, Momofuku does. Some of these efforts will be successful and I can’t wait to see where they go.

Elliot: So good news for the big players who invested or reinvested in the pandemic and bad news for the small shops? And you keep mentioning the B word – branding?

Leventhal: First. No, if you’re a small independent restaurant with a strong brand, you can define your destiny. If there’s anything I’ve learned it’s that knowing your brand is so much of the process. Momofuku started as a noodle shop. It was as small as any other shop. What David Chang clearly defined through ups and downs, was his brand. So small shops, the best thing I can say is if you haven’t defined your brand and you fail, try again.

Elliot: Will you tell me where you’re going to go innovating next?

Leventhal: No, but I can tell you – it will be in restaurants. Stay tuned.

This interview was previously published in the 15 Oct Edition of DINE available to Bloomberg Terminal Subscribers.