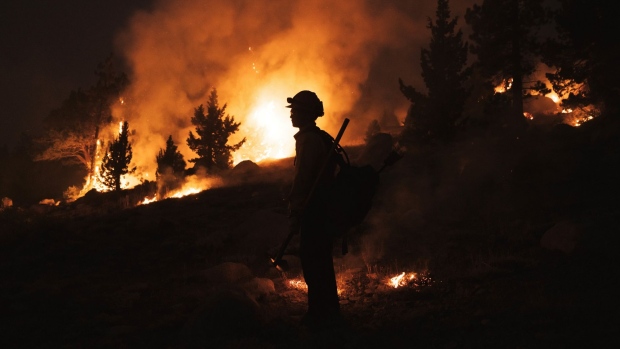 A "High Voltage" sign is displayed on a Pacific Gas & Electric Co. power pole in St. Helena, California, U.S., on Tuesday, April 21, 2020. Federal and state officials are scrambling to develop plans for how to fight the West's wildfires during a pandemic, before a fire season forecast to be worse than normal flares up next month. Photographer: David Paul Morris/Bloomberg , Bloomberg

(Bloomberg) -- Utilities in California and Nevada warned they may have to cut power to some customers to prevent their live wires from sparking wildfires as dry and windy conditions are expected to return to portions of the drought-stricken U.S. West.

PG&E Corp. said it could cut power to residents living in parts of 10 Northern California counties starting on Monday because dry, gusty winds were forecast to follow a weather system that will deliver rain to the Pacific Northwest this weekend, according to a web post Friday. California power company Liberty Utilities and Nevada utility NV Energy said shutoffs were possible in areas around Lake Tahoe.

Wildfires have ravaged the western U.S. this summer amid a severe drought that has left forests and hillsides bone dry. A fast-moving wildfire that started in the hills east of Sacramento forced residents of the resort town of South Lake Tahoe to evacuate ahead of Labor Day weekend. That blaze, called the Caldor Fire, has been largely contained.

Another wildfire burning in Sequoia National Park in Northern California is threatening a famous grove of old-growth giant sequoias.