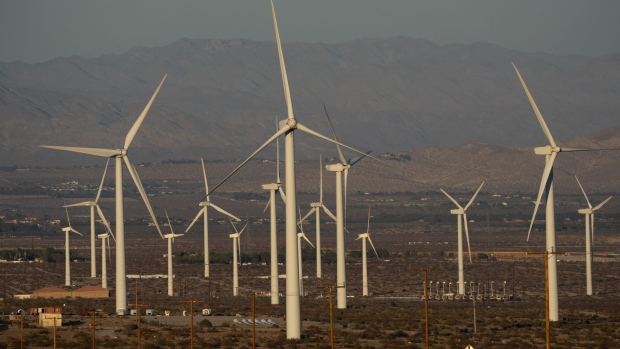 Wind turbines at the San Gorgonio Pass wind farm in Whitewater, California, U.S., on Thursday, June 3, 2021. Communities from California to New England are at risk of power shortages this summer, with heat expected to strain electric grids that serve more than 40% of the U.S. population. , Bloomberg

(Bloomberg) -- Wind turbines in the U.S. produced more electricity than coal or nuclear plants on March 29 for the first time on record, the U.S. Energy Information Administration said Thursday. That made wind the second-biggest source of electricity that day, behind only natural gas and narrowly ahead of nuclear.

Wind farm capacity has increased rapidly in the U.S. over the past 15 years and is widely seen as an important weapon in the push to decarbonize the power grid and the fight against climate change. However, due to the natural variation in wind speeds leading to different amounts of power generation, the EIA doesn’t expect wind to surpass coal or nuclear for an entire month in 2022 or 2023.

The EIA data go back to 2018 and don’t include Alaska or Hawaii.