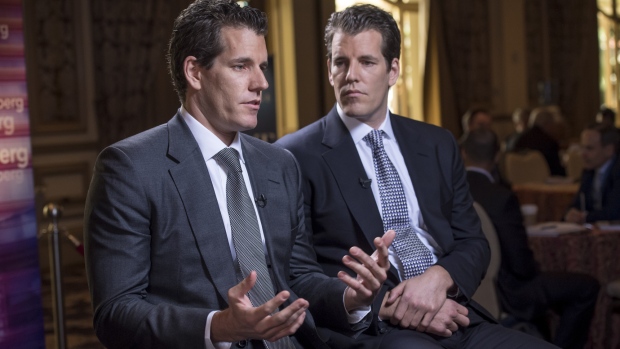 Cameron and Tyler Winklevoss still believe in Bitcoin and are working hard to make a cryptocurrency exchange-traded fund a reality, the brothers said during Monday’s Ask Me Anything session on the popular discussion website Reddit.

“We are committed as ever to making an ETF a reality!” Cameron Winklevoss said in the chat, in which readers posted more than 250 questions and comments, and the brothers -- who run the Gemini Trust Co. exchange and are believed to still hold a large amount of Bitcoin -- answered some of them for over an hour. The questions ran the gamut from the twins’ views of Bitcoin’s future to recommendations for New York karaoke bars.

While Bitcoin’s market value dropped by more than 70 percent last year, the Winklevoss brothers said they’re still confident the cryptocurrency will eventually be used widely in the mainstream economy.

"We believe in the long game," Tyler Winklevoss said in the chat. "Spartans hold!"

"Our thesis around Bitcoin’s upside remains unchanged," Tyler Winklevoss said. "We believe Bitcoin is better at being gold than gold. If we’re right, then over time the market cap of Bitcoin will surpass the ~7 trillion dollar market cap of gold." When asked how many Bitcoins the brothers own, Cameron Winklevoss would only say, "Not as many as Satoshi," referencing Bitcoin’s supposed anonymous creator.

The brothers also said they are continuing to work on a Bitcoin ETF. Last March, the Securities and Exchange Commission rejected the Winklevoss Bitcoin Trust ETF proposal amidst worries about manipulation and transparency in cryptocurrency markets -- concerns the twins are trying to address. This year, self-regulatory organization Virtual Commodity Association, which they helped start, will work to create rules for crypto exchanges and custodians, Cameron Winklevoss said in the chat.