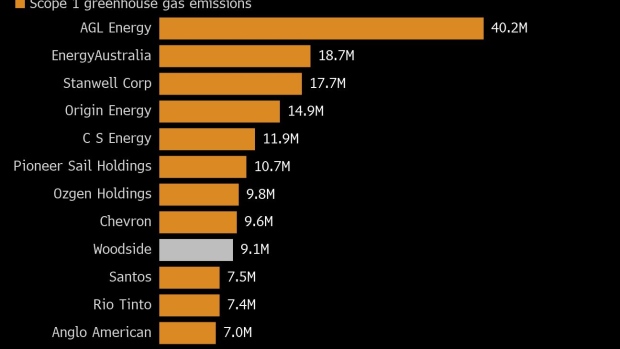 “A significant proportion of shareholders who have already voted on this item have not supported the report,” Chairman Richard Goyder said Thursday at the company’s annual general meeting in Perth. “The Board stands by the quality of both the Climate Report and Woodside’s overall climate strategy.”

Woodside has faced criticism for its emissions reductions plans, especially for failing to do enough to address Scope 3 emissions generated by customers’ use of its fuels. That has resulted in proxy advisory firm Glass, Lewis & Co. to recommend investors to oppose the company’s climate strategy. The report is being put to a non-binding, advisory vote at Thursday’s meeting.

The company’s shares fell as much as 3.3% in Sydney trading. They have rallied about 34% over the past year on the back of high oil and natural gas prices.

California State Teachers’ Retirement System was among shareholders that signaled they would oppose the climate plans, according to a register of voting intentions posted on a website managed by Glass Lewis.

“We will continue incorporating feedback from our shareholders on this important issue as we further develop and evolve our approach,” Goyder said.

Woodside has set out targets to cut Scope 1 and 2 emissions emissions by 15% by 2025 and 30% by 2030 before reducing them to zero by 2050, according to the Climate Plan 2021 report. It also said it would invest $5 billion by 2030 in new energy products such as hydrogen to reduce the far larger scope 3 emissions.

“Woodside’s approach has two key elements – reducing our net equity Scope 1 and 2 greenhouse gas emissions, and investing in the products and services that our customers need as they too reduce their emissions,” Chief Executive Officer Meg O’Neill said at Thursday’s AGM.

Most of the company’s customers are in Japan, South Korea and China, all of which have committed to mid-century goals to hit net zero.