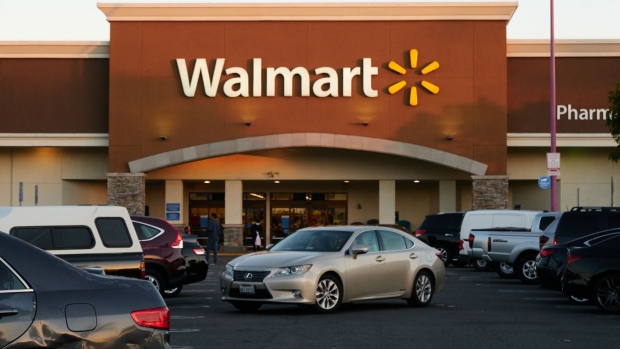 Vehicles in a parking lot at a Walmart store in Torrance, California, US, on Sunday, May 15, 2022. Walmart Inc. is scheduled to release earnings figures on May 17. Photographer: Bing Guan/Bloomberg , Bloomberg

Walmart, controlled by the family, fell as much as 11% in New York trading after the Bentonville, Arkansas-based company reported earnings that lagged analysts’ estimates. Soaring inflation heaped pressure on the retailing giant’s profit margins in the first quarter, testing the company’s appetite to raise prices.

The family’s late patriarch, Sam Walton, centered the business around a discount ethos that has in the past helped buoy its stock during recessionary times. Walton’s three surviving children, Alice, Jim and Rob, daughter-in-law Christy and Christy’s son, Lukas, own just under half the retailer, giving them a combined net worth of about $214 billion, according to the Bloomberg Billionaires Index.

The family, which owns its stake through various trusts, has stepped up its stock sales in recent years. They unloaded $6.2 billion in shares last year, which the company has said is part of a strategy to keep the family’s stake under 50% amid buybacks.

Those disposals have helped the Waltons accumulate significant wealth outside their Walmart stake. An investment firm for the family invests mostly in low-cost exchange-traded funds and held about $5.1 billion in US stocks and ETFs at the end of the first quarter.

That’s armed them with ample funds for acquisitions. Rob Walton is said to be bidding for the Denver Broncos, the first National Football League team to be up for sale in four years. It’s expected to sell for more than $4 billion.