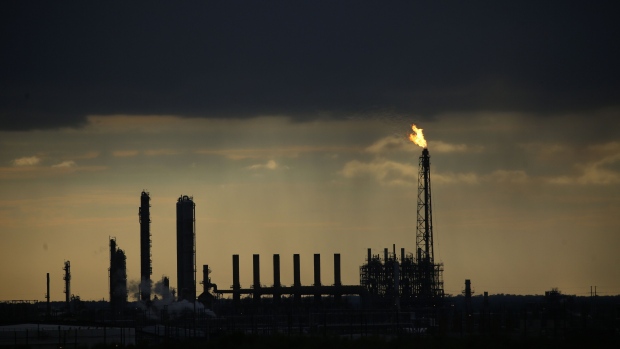 A gas flare at a Chevron Phillips Chemical Co. plant ahead of Hurricane Laura in Port Arthur, Texas, U.S., on Tuesday, Aug. 25, 2020. Hurricane Laura is poised to become a roof-ripping Category 3 storm when it comes ashore along the Texas-Louisiana coast, threatening to inflict as much as $12 billion of damage on the region and potentially shutting 12% of U.S. refining capacity for months. Photographer: Luke Sharrett/Bloomberg , Bloomberg

The benchmark’s surge above the key level comes after the U.S. Energy Department said that it had no plans “at this time” to tap the nation’s oil reserves, cooling fears that the rally would be tempered with emergency supply.

That comments came after Saudi Arabia and its partners opted to only modestly increase output in November. Many analysts had expected OPEC+ to deliver a bigger hike as the surge in natural gas prices looks set to cause a spike in oil demand this winter.