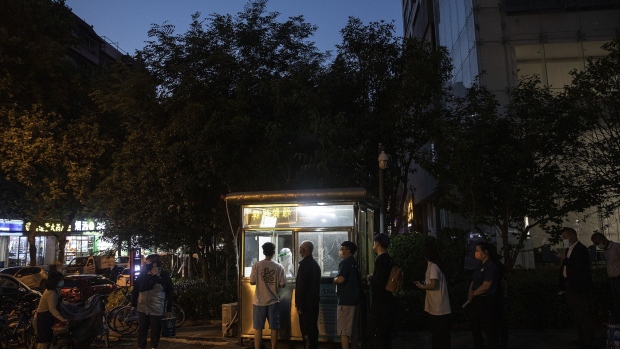 (Bloomberg) -- Covid-19 has returned to the central Chinese city where it first emerged, with two cases reported in Wuhan and a swelling outbreak in a neighboring province, just as Beijing and Shanghai appear to have quelled the virus once again.

Two port workers in Wuhan came down with asymptomatic Covid infections, authorities said Friday. They’re the first cases there in more than a month and come just days after President Xi Jinping’s symbolic visit to the city, where he reiterated China’s pursuit of a zero-tolerance pandemic policy that’s leaving the country isolated and subject to unpredictable restrictions.

Meanwhile, Anhui province to the east reported a significant increase in cases, to 107 on Friday from 14 a day ago, mostly in a small county of some 763,000 people that has already been locked down. The county will undergo a fourth round of mass testing to weed out infections, with positive cases and their close contacts sent to government quarantine, in line with China’s ongoing approach.

Beijing and Shanghai reported zero Covid cases on Friday, with the leader of China’s top financial hub declaring victory over Covid earlier in the week and describing a grueling two-month lockdown where millions were confined to their homes and suffered food shortages as “completely correct.” Beijing managed to avoid a full lockdown with more targeted restrictions, such as work-from-home orders.

China reported a total of 163 infections for Thursday, the most in three weeks.

China is now deploying an updated Covid Zero playbook which halves quarantine periods for close contacts and incoming travelers to a week, but standardizes the more extensive deployment of mass testing and lockdowns. The aim is to use stepped-up surveillance via ubiquitous testing and early, aggressive restrictions to avoid the significant economic hit of lengthy lockdowns, like the one in Shanghai.

While the rest of the world chooses to live with endemic Covid, accepting higher caseloads and fatalities given widespread vaccination, China is going its own way. Xi and his government have used China’s Covid death rate, one of the lowest in the world, as proof of the Communist Party’s heft, with the president saying this week the population is too large for “such strategies as ‘herd immunity’ and ‘lying flat”’ and that deploying them in China would have “unimaginable” consequences.

Most China watchers have long expected the country will look to exit Covid Zero once Xi secures a third term later this year, but his comments this week and the establishment of a brick-and-mortar network of testing stations has raised questions over whether it could be deployed much longer, with tweaks to limit economic fallout.