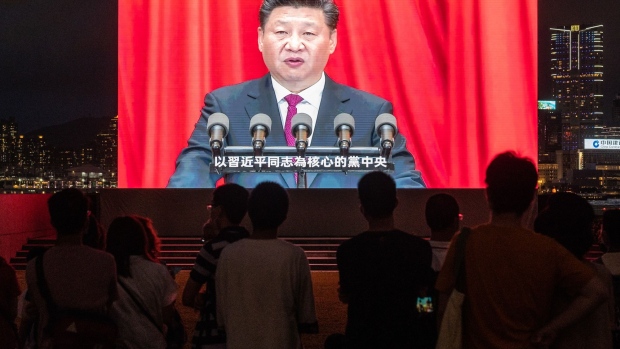 A screen shows Chinese President Xi Jinping speaking at a light show marking the centenary of the Chinese Community Party and the anniversary of Hong Kong's return to Chinese rule at Tamar Park in Hong Kong, China, on Thursday, July 1, 2021. Hong Kong's leader pledged to press ahead with an unprecedented national security crackdown, as the Asian financial center marked a series of fraught anniversaries symbolizing Beijings tightening grip over local affairs. , Bloomberg

(Bloomberg) -- Chinese President Xi Jinping warned of the improper accumulation of wealth and the risk it poses to a healthy economy in previously unpublished remarks by a Communist Party journal.

China needs to expand the real economy and avoid a mass jobless situation, Xi said in a speech on Dec. 8 at the annual Central Economic Work Conference, and published by Qiushi magazine on Sunday. He also warned of disorderly capital expansion, and financial and property market risks.

Xi highlighted that while China shouldn’t allow “capital predators” to act recklessly, it needs to ensure orderly growth of capital and not just get rid of it. It’s unclear why the journal released the remarks more than five months after the speech was made.

The leader also said financial risks are a result of a lack of oversight in the governance of financial institutions; relaxed management of local debts; blind expansion by large enterprises and their excessive reliance on financial leverage; financial fraud; corruption; and a slowdown in economic growth.

There should also be a national strategic material reserve system so it can ensure stability in critical moments, Xi said.