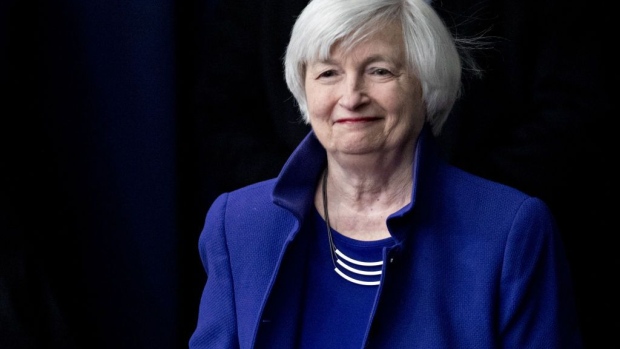 Janet Yellen, chair of the U.S. Federal Reserve, arrives to a news conference following a Federal Open Market Committee (FOMC) meeting in Washington, D.C., U.S., on Wednesday, Dec. 13, 2017. Federal Reserve officials followed through on an expected interest-rate increase and raised their forecast for economic growth in 2018, even as they stuck with a projection for three hikes in the coming year. , Photographer: Bloomberg/Bloomberg

Janet Yellen moved toward confirmation as Treasury secretary on Friday after getting the unanimous approval of the Senate Finance Committee, with a potential vote by the full chamber later in the day.

The panel approved Yellen in a 26-0 vote Friday morning. Ron Wyden, the top Democrat on the committee, said the full Senate could hold a confirmation vote Friday afternoon.

Chuck Grassley, the top Republican on the panel, said that there is “no doubt” about her qualifications, though he didn’t expect to support her entire agenda. GOP Senator Michael Crapo also said he had strong concerns about Yellen’s tax policy, but the Republican support indicates that “we want to engage.”

The bipartisan vote suggests Yellen will win easy confirmation from the Senate, which the Democrats now control by virtue of a tie-breaking vote from Vice President Kamala Harris. Many Republican lawmakers have already voiced their support for Yellen.

Senator John Cornyn, a Texas Republican, told reporters, “She just got voted unanimously out of Finance and I imagine we’ll vote on her this afternoon.”

“In the Senate you have a hard time getting 26 senators to agree to buy a soda,” Wyden told reporters. “She ought to be confirmed some time today.”

The 74-year-old former Federal Reserve chair -- who would be the first female Treasury secretary -- will step into the job as President Joe Biden struggles to gain Republican support for his proposed US$1.9 trillion stimulus package, which includes funds for vaccine distribution along with US$1,400 payments to Americans and extensions to special unemployment benefits.

Biden’s broad plan has garnered little enthusiasm from even moderate Republicans, who say that it’s coming too close on the heels of the US$900 billion package approved in December and that it includes several components not directly tied to pandemic relief.

“It’s clear that fiscal stimulus to support the economy and the working families most affected by the impact of COVID-19 is our most urgent priority,” Yellen said Thursday in a written response to questions from senators following her confirmation hearing earlier in the week.

Spending now is “critical” to boost the U.S.’s long-term fiscal health, she said.