Should Investors Be Concerned About Inflation?

Treasury Secretary Janet Yellen faces the challenge of speeding a debt-ceiling increase through Congress without shaking investor confidence, a potentially difficult task even with Democrats controlling both chambers and the White House.

The current suspension of the U.S. borrowing limit expires on Aug. 1, and the Treasury Department on Wednesday cautioned that if Congress fails to act, the administration would have to shift federal funding to make good on debt payments. Officials are looking at scenarios where those accounting measures “could be exhausted much more quickly” than previously, the department said.

Even if the Treasury could stave off any default for months, as during past occasions when congressional talks dragged out before a final resolution, investors face the risk of disruption this summer. Officials would likely need to sharply cut sales of Treasury bills, at a time when traders have already complained about scarcity and some auctions have featured yields at 0%.

It all poses a negotiating and messaging challenge for Yellen, who this week saw the consequence of a miscue in public communications. Stocks dropped briefly after an unexpected comment on the potential for higher interest rates in order to stem “overheating” risks in the wake of heightened government spending. 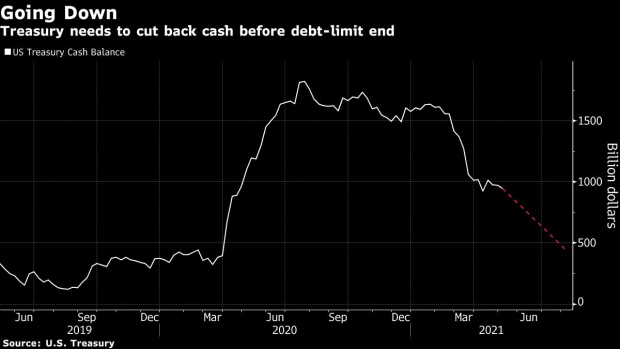 While President Joe Biden has relied on a diverse group of White House aides and cabinet members to help sell the March US$1.9 trillion pandemic-relief bill and the proposed US$4 trillion of longer-term economic measures, responsibility for the debt limit falls squarely on Yellen’s shoulders.

The ceiling was suspended under a 2019 agreement between the Trump administration and Congress. It’s been a political football in the past because voting for an increase can invite political attacks over ramping up the debt burden for future generations.

Yellen will need Congress to refrain from political brinkmanship and avoid any disruption -- at worst a default or government shutdown -- that would undermine the recovery from the pandemic.

Navigating the debt limit debate is also a test of unity within the Democratic Party. With slim majorities in both chambers of Congress, Democrats are widely expected to raise the debt ceiling using a fast-track budget tool enabling them to bypass a Senate Republican filibuster. That would deprive the GOP of being able to use the debt ceiling as leverage in exchange for spending cuts.

Yet pushing through a debt-limit increase using that tactic could mean wrapping it together with a raft of spending and tax measures that follow through on Biden’s longer-term economic proposals.

That in turn means Democrats would have to unify behind a grand compromise in the weeks after the Aug. 1 end of the debt limit suspension, before Treasury measures run out.

“The U.S. is not going to default on its debt, but financial markets will not be fully relieved until we hear from conservative Democrats that they will support raising the debt ceiling,” said Edward Moya, a senior market analyst at OANDA Corp., a trading firm.

He referred to the “political theater” of 2011 between Republicans and the Obama administration that led to the shock downgrade of the U.S. sovereign rating by Standard & Poor’s.

One complication this year is the unusual pattern of Treasury debt issuance. The department ramped up sales of short-dated securities in 2020 and accumulated a massive US$1.8 trillion stockpile of cash to prepare for any COVID-19 spending needs or revenue shortfalls. Now that it’s working that cash down, it’s selling much less in T-bills -- causing ripples in markets.

Those ripples could become a whole lot bigger if the debt limit isn’t raised by July 31.

“Elevated risks of volatility in money markets remain as this date approaches and Treasury bills outstanding decline,” a Treasury advisory group made up of investors and bond dealers told Yellen in a letter on Tuesday. The group “strongly urges Congress to suspend or raise the debt limit in a timely manner.”

Bharat Ramamurti, deputy director of the National Economic Council, said on Bloomberg TV Wednesday, “Our expectation and our hope is that Congress would do the same” as during Republican administrations, when there were bipartisan votes to raise or suspend the debt limit.

Even so, moderate House Democrats facing an uphill battle to keep their seats in the 2022 midterm elections may be reluctant to vote for increasing debt without at least some kind of budget reforms -- such as changing rules to force lawmakers to adopt an annual federal budget or forgo their paychecks.

The Treasury probably has until after the start of the 2022 fiscal year on Oct. 1 until “the federal government will no longer be able to meet all its obligations in full and on time,” the Bipartisan Policy Center said in a statement.

In a worst-case scenario, there could be a fallback option to buy time. During the Obama administration, the Treasury crafted a secret plan to prioritize debt payments if the U.S. government reached its statutory limit on borrowing. It was widely panned, and never used. But when Brian Smith, the Treasury’s deputy assistant secretary for federal finance, was asked about whether such a blueprint were on the table, he declined to respond.