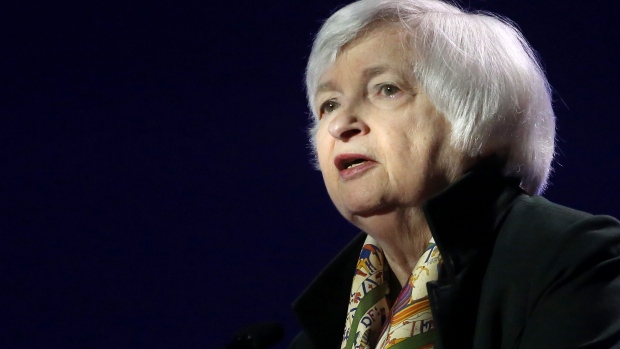 Janet Yellen, US Treasury secretary, delivers the "Tommaso Padoa Schioppa" lecture at the Brussels Economic Forum in Brussels, Belgium, on Tuesday, May 17, 2022. Yellen said that western democracies have become "too vulnerable" to countries that use their market positions as geopolitical leverage, and called for the US and Europe to coordinate their approach toward China after having united against Russia. , Bloomberg

(Bloomberg) -- Janet Yellen, worried by the specter of inflation, initially urged Biden administration officials to scale back the $1.9 trillion American Rescue Plan by a third, according to an advance copy of a biography on the Treasury secretary.

“Privately, Yellen agreed with Summers that too much government money was flowing into the economy too quickly,” writes Owen Ullmann, the book’s author and a veteran Washington journalist, referring to former Treasury Secretary Lawrence Summers, who severely criticized the size of the aid plan. The book is due out on Sept. 27.

A Treasury spokesperson disputed the claims.

“The Secretary did not urge a smaller package and, as she has said, believes that without the American Rescue Plan, millions of people would have been economically scarred, and the country’s historically fast recovery would have been far slower,” Treasury spokesperson Lily Adams said in response to the book’s claims.

Ullmann’s account sheds new light on a policy debate that preceded the eruption of inflation, which now poses a major political threat to President Joe Biden and his Democratic party’s control of Congress.

Fears of overheating have since proved justified as price increases this year hit a 40-year high and severely damaged Biden’s standing among voters. Democrats have blamed the cost surge on supply-chain bottlenecks caused by the pandemic and on energy price surges following Russia’s invasion of Ukraine. They’ve also pointed a finger at moves by companies in some sectors to pad their profits. But most economists cite outsize demand -- fueled in part by Biden’s spending plan -- as having been a significant factor.

Yellen’s concern about inflation “is why she had sought without success to scale back the $1.9 trillion relief plan by a third early in 2021 before Congress passed the enormous program,” wrote Ullmann, who had “unfiltered access” to Yellen as he researched the book, according to publisher PublicAffairs.

Ullmann wrote, “She worried that so much money in the pockets of consumers and businesses would drive up prices at a time when the pandemic had caused severe shortages of goods that were in unprecedentedly high demand.”

It’s unclear from the book how staunchly Yellen lobbied to cut back the size of the third wave of aid or whom she engaged with in the administration. And Ullmann goes on to emphasize that Yellen threw her full weight behind the bill as it moved ahead in its larger size.

The Treasury chief endorsed the package before US lawmakers, telling them that historically low interest costs on federal debt had given the government space for fiscal expansion. She has continued to defend the ARP even as high inflation proved persistent. In an April 28 speech, she said it had helped drive unemployment to 3.6%, practically a 50-year low, and had prevented the pandemic from causing a much higher degree of suffering for Americans.

Still, Yellen “would have preferred something closer to $1.3 trillion, according to colleagues,” Ullmann wrote. “But given the choice between Biden’s full $1.9 trillion package and less than $1 trillion that some in Congress preferred, Yellen believed going big was the better course.”

Yellen also felt that even if the bill pumped too much money into the economy, the subsequent spike in inflation would be “transitory,” a term she used through 2021.

In a June 1 television interview, Yellen admitted, “I was wrong about the path inflation would take.” Though she added that much of the miss was due to unanticipated shocks, including the emergence of new Covid-19 variants and the war in Ukraine.

According to Ullmann, Yellen was angered by Summers’ attacks on the stimulus plan, even though she shared some of his worries.

“Yellen was irritated that he would cause his own party so much grief by arming Republicans and some Democrats -- such as Senator Joe Manchin of West Virginia, a conservative by Democratic standards -- with a justification for opposing subsequent spending proposals on Biden’s agenda,” Ullmann wrote.

Ullmann has covered economics and politics in Washington since 1983, with stints at Knight Ridder, BusinessWeek and USA Today.