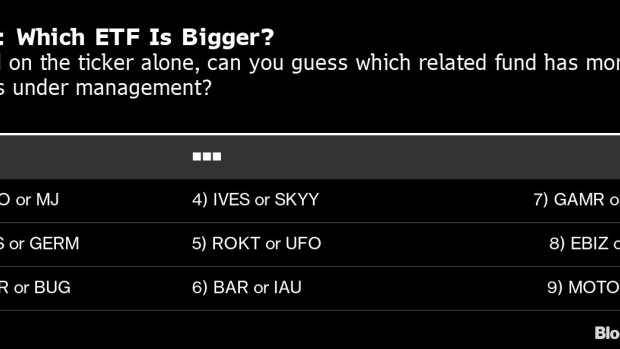 (Bloomberg) -- In April 2008, two funds launched within days of each other on the same exchange, charging roughly the same fees and both investing in the solar industry. Flash forward to now, one is liquidated and the other has crossed $1 billion in assets.

If you knew nothing further except their tickers, TAN and KWT, could you say which thrived and which died?

The Invesco Solar ETF, otherwise known as TAN, is the biggest exchange-traded fund focused on clean energy in the U.S. The VanEck Vectors Solar Energy ETF, or KWT, was killed off in 2017. To many industry observers, the tickers helped decide their fates.

“There wasn’t any first to market advantage, they both came from medium-sized issuers, their holdings were pretty close and the fees were close,” said Todd Rosenbluth, director of ETF research at CFRA Research. “It had to be the ticker.”

To compete in the $4.6 trillion ETF industry, issuers have long tried to stand out by using catchy tickers. As the number of funds exploded past 2,200, early examples such as MOO have been joined by the likes of YOLO, HERO and HACK as the name games ramp up. Now, with a flood of day traders entering the market, a memorable moniker could be more valuable than ever.

Retail investors “probably pay less attention or have less research capacity to go beyond names,” said Linda Zhang, chief executive officer of Purview Investments. “Some of them may not even be aware of the cost of trading in terms of the spread of the product.”

Studies have determined that stock tickers can impact trading behavior. One 2018 report found that stocks with names that are actual words in the English language had both greater liquidity and lower spreads. They were also traded more by uninformed investors.

There are no major studies on ETF tickers, but some anecdotal evidence suggests an appealing name can provide a boost. For instance, a low carbon fund from State Street (LOWC) and a similar product from BlackRock (CRBN) launched within a month of each other in 2014, both with a 0.2% expense ratio. Six years later, both have had a similar performance, but CRBN currently has about $447 million in assets, while LOWC is at only $60 million.

Of course, the name is just one factor in an ETF’s destiny. Cost, marketing, distribution and structure are all key to success, and help explain why IYT is more than $700 million larger than HAIL.

(Answers can be found at the end of this article.(3))

Since 2016, the amount of clever tickers appears to have risen sharply alongside fund debuts. Entrants so far in 2020 include a gaming fund called BETZ, a commerce product named BUYZ and the pandemic-themed GERM and WFH.

First time isn’t always the charm when it comes to an ETF’s ticker. ROKT, a fund that invests globally in space and sea exploration, began as XKFF.

“I think they were trying to think ‘these are themes that are close to our sector and our sector starts with X,’ but it was just bad,” said Eric Balchunas, an ETF analyst with Bloomberg Intelligence.

While only 16 funds changed their tickers in 2014, more than 50 did so in 2019 and 34 have so far in 2020. For instance, the Roundhill Acquirers Deep Value ETF recently became DEEP instead of DVP, and the ALPS REIT Dividend Dogs ETF is now RDOG instead of GRI.

Jay Jacobs, head of research and strategy at Global X Management Company, the firm behind such tickers as DRIV, HERO and DIV, said that as many as 10 people are involved in the naming process.

“There’s two things that are important about a ticker: the first is that it’s memorable and the second is that it helps convey the objective of the fund," said Jacobs. "If you can accomplish both, that’s a great accomplishment and frankly very hard to do.”

“If you have a catchy name meaning something that’s easy to remember and it’s pretty visual to describe what it is,” Purview Investments’ Zhang said, “then you’re probably halfway there.”