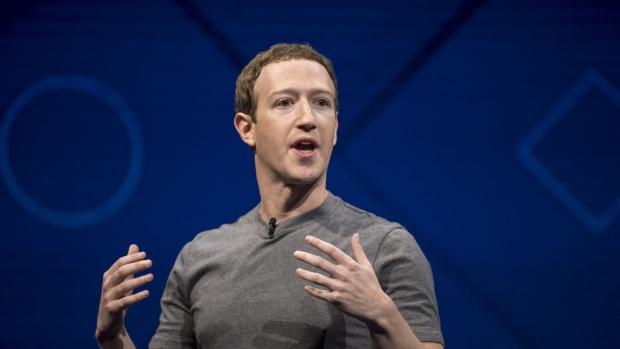 (Bloomberg) -- The attorney general of Washington, D.C., said he would add Facebook Inc. Chief Executive Officer Mark Zuckerberg to a consumer protection lawsuit against the social media company, one of the first times a law enforcement official has personally targeted the Facebook founder.

The District of Columbia sued Facebook over its handling of user data, exemplified by a privacy breach in which the personal information of millions of Americans was transferred to Cambridge Analytica, a political consulting firm hired by former president Donald Trump’s presidential campaign.

In a tweet on Wednesday, Attorney General Karl Racine said he was adding Zuckerberg as a defendant in the lawsuit, which he filed in D.C. Superior Court in 2018. Racine said he decided to directly target Zuckerberg after his office reviewed thousands of pages of documents produced during the litigation and conducted depositions with former employees and whistle-blowers.

“We will continue to defend ourselves vigorously and focus on the facts,” the spokesman said.

The lawsuit alleged that Facebook violated the district’s Consumer Protection and Procedures Act through lax oversight of the company’s third-party applications. The Cambridge Analytica scandal hinged on a third-party company, Global Science Research, which used a personality quiz app to obtain information from Facebook on as many as 85 million Americans.

“We will immediately turn our focus to obtaining all of the evidence proving that Facebook broke district law and did not follow its own policies to protect the privacy of more than 340,000 Facebook users who reside in the district,” Racine said in a statement in 2019 after a judge denied Facebook’s request to dismiss the case.

Facebook is under pressure on multiple fronts, especially after a former employee, Frances Haugen, shared thousands of pages of internal research and documents with the news media and testified before Congress. She alleges the company prioritized profit while stoking division, undermining democracy and harming the mental health of its youngest users.

The Wall Street Journal last month published some of the internal research provided by Haugen, who testified on Oct. 5 before a panel of the Senate Commerce Committee. At the hearing, she slammed Facebook for not putting the well-being of its users first. Zuckerberg denied the characterization, saying it was “just not true.”