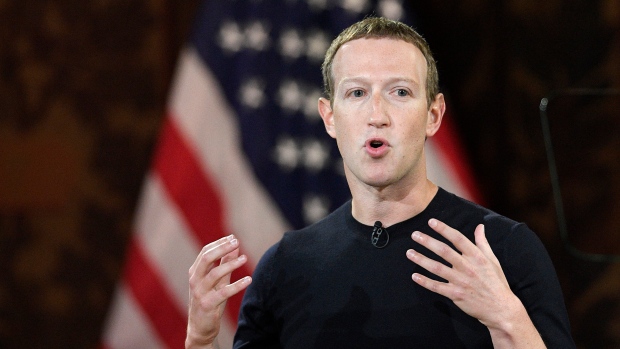 Facebook Inc. Chief Executive Officer Mark Zuckerberg said that the social network, with its enormous size and scale, offers people a new kind of power: the ability to share their thoughts with the masses.

Zuckerberg called this power “a fifth estate alongside the other power structures in our society.” Speaking on Thursday to an auditorium full of students at Georgetown University’s Gaston Hall in Washington, he touted the importance of giving individuals a voice, which is where the most progress comes for social change.

In his speech, Zuckerberg said internet services like Facebook can still protect free expression while addressing problems that have been raised by this new technology. He acknowledged that when everyone has a voice, some people will use that to try to organize violence and influence elections. At Facebook’s scale, even if a very small percentage of people try to cause harm, that’s still a lot, Zuckerberg said. The company has chosen to focus on the authenticity of the speaker rather than judging the content itself, he said.

Zuckerberg earlier said this speech would be his most comprehensive, unfiltered exploration of the content policy issues facing his company, the world’s largest social network. While Facebook, as a private business, is not beholden to free-speech rules per the First Amendment, more than 2.7 billion people use its products around the world. The company’s algorithm--software that decides what people see in their feeds--and content policies have a tremendous impact on whose voices are heard.

The company’s decisions have often been controversial, putting Facebook in a constant defensive posture with many government leaders, who either think Facebook is doing too much or not enough to police its properties.

In recent weeks, Facebook has been criticized for a policy that allows election advertisements with false information. The presidential campaigns of Joe Biden and Elizabeth Warren have called on Facebook to remove ads from U.S. President Donald Trump’s campaign. Facebook has declined to do so, raising the larger question of whether social media political ads should be regulated. Zuckerberg said on Thursday that he’s considered getting rid of political ads altogether, but banning them would favor incumbents.

“I don’t want to live in a world where people can only post things that tech companies judge to be true,” Zuckerberg said Thursday on the subject of political ads. “In a democracy people should decide what’s credible, not tech companies.”

Facebook’s rules on what stays up and gets taken down on its social network, as well as on Instagram, Facebook Messenger and WhatsApp platforms, are applied by a global group of thousands of low-wage contractors, who manage more than 100 billion pieces of content across the digital properties daily. The results are often inconsistent, causing confusion. The company is building an independent oversight board that can be the last word on Facebook decisions that users disagree with.

Besides the content policies, Facebook has been under fire for its news feed algorithm, which tends to highlight content that triggers an emotional response in users. That means shocking news, including false information, tends to spread quickly there. Facebook has been hesitant to remove misinformation because of concerns, especially on the conservative side, about showing political bias. Zuckerberg has been meeting conservative pundits to improve the relationship, though the company has said it hasn’t found any evidence of bias.