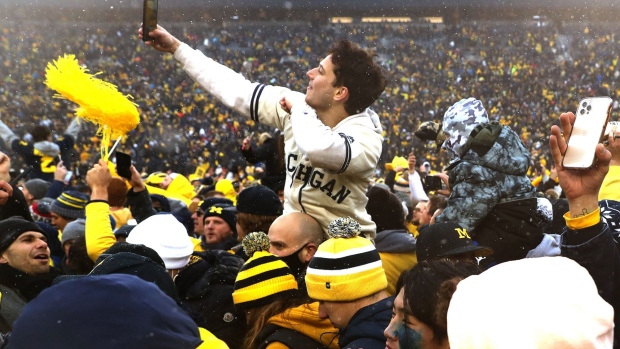 (Bloomberg) -- More than 110,000 fans packed into the University of Michigan football stadium to see the Wolverines beat rival Ohio State for the first time in a decade. The post-game celebrations offered a stark contrast to the calls for caution by world governments concerned about the emergence of the omicron variant and a winter Covid surge.

For millions of college football fans across the U.S., Saturday was blissfully regular. Stadiums were packed in Florida, Oklahoma, Minnesota and elsewhere for what’s known as ‘rivalry week.’ Even more went to see professional football, basketball, hockey and soccer games, plus other college and high school athletic events.

The scenes of social normality came after a week of renewed concern about the Covid pandemic. The day before, markets went deep red, as the S&P 500 suffered its worst post-Thanksgiving performance since 1941. U.S. stock index futures regained some of their losses in Asia morning hours Monday.

Thanksgiving weekend travel was also almost back to normal, with daily totals 83% to 90% of prepandemic volume, according to the Transportation Security Administration, which handles U.S. airport travel screening.

As of Sunday evening, the U.S. has yet to report a case of the omicron variant. Neighboring Canada has identified at least two infections in people who had recently traveled from Nigeria.

President Joe Biden has imposed a broad entry ban as of Monday on people who have been in South Africa and seven nearby countries, seeking to halt the spread of the omicron variant. The European Union, the U.K., Canada and several Asian countries have imposed similar measures.