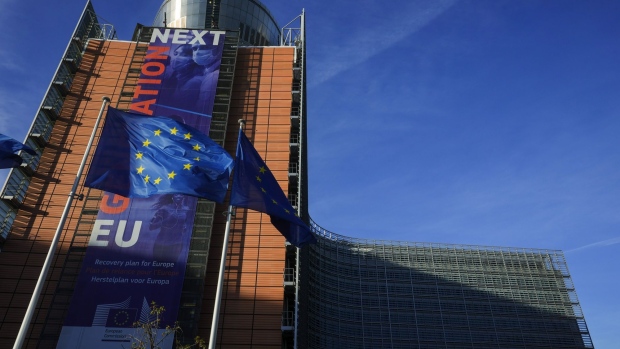 European Union (EU) flags fly outside the Berlaymont building in Brussels, Belgium, on Friday, Dec. 18, 2020. Britain’s chief Brexit negotiator, David Frost, warned progress in the talks has been “blocked and time is running out” as leaders from both sides played down expectations a deal will be reached. Photographer: Olivier Matthys/Bloomberg , Bloomberg

Europe would do more harm than good if it turns off its state-aid taps too soon in the wake of the coronavirus pandemic, the region’s top subsidy enforcer warned.

Olivier Guersent, the head of the European Commission’s competition service, said that even firms that have weathered the storm without needing state handouts could still be dragged down if the rules are tightened before the crisis has abated.

“It would be a mistake” to cut off the aid before it’s clear how well European countries are managing the spread of the virus or if a vaccine-resistant strain emerges, Guersent said in an interview. “We all hoped that by this time we would know” where it ends “but we’re not out of the woods yet.”

The European Union will soon decide on extending special state-aid measures beyond a Dec. 31 deadline, which allowed more government support than its tough rulebook would normally allow. So far governments have pledged 3 trillion euro ($3.5 trillion) in subsidies to help economies weather the biggest economic storm since the great depression.

Regulators have suggested a progressive phase out to end many support programs by June next year. But officials are weighing government responses before publishing the new rules in the near future.

While the EU will have to stop emergency liquidity and solvency support at some time, it could potentially allow governments more leeway to grant investment aid to spur health or other innovations, Guersent said.

State aid ultimately has to take the lead from what finance ministers and central banks are doing, he said. “You cannot maintain a very flexible state aid regime and at the same time” tell governments to “go back to normal” to abide by the EU’s strict budget and deficit rules.

EU policymakers are separately weighing how to handle rules on debt and deficit limits going forward.

The Frenchman, 59, has since January 2020 headed the powerful EU unit handling antitrust probes, merger reviews and subsidy checks. He previously served as the EU’s top financial services official and as a chief aide to Michel Barnier, then the EU’s internal market commissioner.