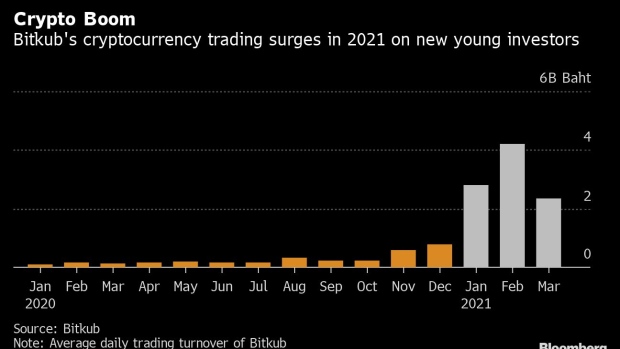 (Bloomberg) -- Atichanan Pulges first became interested in cryptocurrencies a decade ago when he was an engineering student in Los Angeles. Mining Bitcoin was a way for the Bangkok native to learn about markets and pay his rent.

Now back in Thailand after a stint at Goldman Sachs Group Inc., Atichanan is a co-founder of the nation’s largest licensed cryptocurrency exchange. He’s also on the front lines of an intensifying debate over who should be allowed to buy digital assets in Southeast Asia’s second-largest economy.

Thailand’s Securities and Exchange Commission, alarmed by a sixfold surge in domestic crypto trading since November, said on April 1 that it would soon require traders to have experience, or take courses or pass an exam. The regulator didn’t finalize a date and opted not to ban local exchanges from accepting clients who didn’t meet minimum-income levels, which had been mulled. Digital-asset proponents including Atichanan argue that too many restrictions will merely drive Thais to unregulated platforms overseas.

“The regulator realizes any curbs can’t reverse the tide toward toward digital,” said Atichanan, 33, who co-founded Bitkub in 2018. He said the exchange accounts for about 90% of domestic crypto trading and serves 300,000 customers, figures that Bloomberg has been unable to independently verify.

While volumes on Thai crypto exchanges are still small relative to counterparts in countries like the U.S. and South Korea, they’ve been surging in recent months as digital assets including Bitcoin have jumped to all-time highs.

Total trading turnover on all local licensed crypto exchanges jumped to 124 billion baht ($3.96 billion) in February from 18 billion baht in November, according to data from the Thai SEC, which only date back to November. Bitkub’s daily turnover of 4.2 billion baht in February reflects an increase of nearly 40% from a month earlier, according to the company’s statistics. A 24-hour turnover figure on March 30 ranked it 124th among more than 300 exchanges worldwide tracked by CoinMarketCap.

As in other markets that have experienced a spike in retail trading during the pandemic, crypto activity in Thailand has soared in large part thanks to demand from younger investors. The boom has also been marked by hiccups at local exchange operators, including Bitkub.

Both developments have attracted scrutiny from the Thai SEC. In January, the regulator asked Bitkub to submit a plan to address investor complaints about “problematic work systems” that have caused trading outages. A month later, the regulator said it was considering eligibility restrictions for clients of crypto exchanges that include a minimum income of more than 1 million baht. The SEC at its April 1 meeting decided not to impose the income requirement, opting for an education or knowledge program.

“Crypto participants, including platform operators and investors, are mostly young and passionate about new technology and decentralization,” Ruenvadee Suwanmongkol, the SEC’s secretary general, said in an interview. “They must realize any financial innovation also has the potential to cause collateral damage to the general public and financial system.”

The SEC abandoned its income requirement after gathering feedback from market participants. The borderless and decentralized nature of crypto trading makes such controls difficult to implement, said Poomsiri Dumrongvute, who teaches a financial technology course at Chulalongkorn University in Bangkok.

Bitkub has made a similar argument in its feedback to regulators, also noting that stricter curbs could hamper the development of local blockchain technology.

Despite the regulatory risk, Bitkub is gearing up for a major expansion. The company plans to double staff to 500 by year-end, introduce its own debit card and open a physical crypto trading outlet in Bangkok to lure new entrants and serve as a meeting place for existing ones, according to Atichanan. Over the longer term, Bitkub has ambitions to gain “unicorn” status, or a private valuation of more than $1 billion.

Atichanan said the exchange raised the equivalent of $11 million from investors in three rounds since its establishment, though he declined to comment on the company’s current valuation.