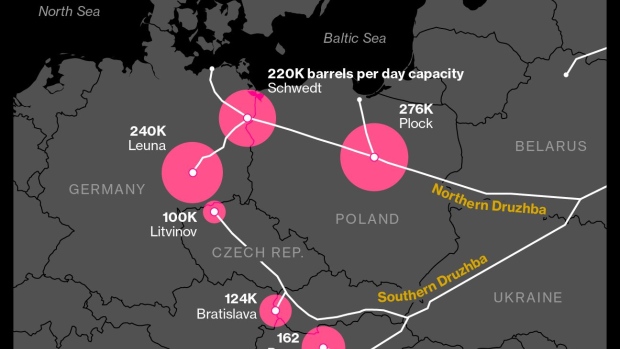 (Bloomberg) -- Stop the flow of oil from Russia and large parts of Germany would grind to a halt.

While neighboring Poland is weaning itself off the Kremlin’s crude, Europe’s industrial powerhouse remains so dependent that it would struggle to support the ban on Russian fuel supplies that’s under debate in the European Union this week, writes Bloomberg oil strategist Julian Lee.

This dependence at the heart of the continent greatly limits the economic punishment the EU can mete out to Vladimir Putin for his invasion of Ukraine.

The Druzhba pipeline is a vital source of crude for Germany’s Schwedt and Leuna refineries. The plants process nearly 500,000 barrels a day of crude, most of it originating in Russia. If that supply is cut off, much of eastern Germany will quickly run short of fuel.

Schwedt supplies 90% of the gasoline, jet fuel, diesel and heating oil consumed in Berlin and Brandenburg, according to the refinery’s website. Leuna is the primary supplier of fuels to the Thuringia, Saxony and Saxony-Anhalt regions -- including the cities of Dresden and Leipzig.

The Schwedt refinery does have an alternative source of supply through a pipeline from the German port of Rostock, which could in theory receive crude from other parts of the world. But the line’s capacity is just 140,000 barrels a day -- enough to cover only 60% of the feedstock the plant needs. Leuna has no other source of pipeline deliveries.

To complicate matters further, Schwedt’s biggest shareholder is Rosneft PJSC, a Russian company controlled by the Kremlin. It was in the process of buying Shell Plc’s 37.5% stake in the plant to take its holding to almost 92%, but that plan is being reviewed by the German government.

Other EU countries face a similar problem, but less severe.

Refineries at Litvinov in the Czech Republic, Bratislava in Slovakia and near Budapest in Hungary, owned by MOL Hungarian Oil and Gas Plc, all receive crude delivered through the Druzhba pipeline system.

An alternative supply route, delivering seaborne crude through a pipeline from the Croatian port of Omisalj, could provide some relief, but the capacity of that line to deliver crude to those refineries is limited to 200,000 barrels a day, according to operator Jadranski Naftovod d.d., more commonly known as Janaf.

If the EU were ever to ban imports of crude through Druzhba, or if Russia itself were to cut the flows, the markets served by these refineries would find themselves dependent on securing scarce volumes of refined products from elsewhere, and reliant on expensive delivery by truck and rail.

For the Czech Republic and Slovakia, but most of all for Germany, the cost of sanctioning Russia oil would be prohibitive.

NOTE: Julian Lee is an oil strategist who writes for Bloomberg. The observations he makes are his own and are not intended as investment advice