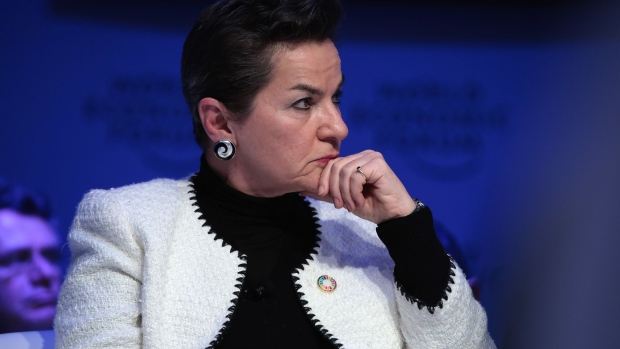 (Bloomberg) -- The Paris Agreement in 2015 established a 1.5° Celsius goal as a rallying point for every nation in the world, and the Costa Rican diplomat Christiana Figueres was one of its chief architects. With the release of Monday’s latest report from the Intergovernmental Panel on Climate Change, she’s faced with the increasingly probable outcome that the temperature threshold she helped establish as former executive secretary of the UN Framework Convention on Climate Change will be passed in the years ahead.

“I don’t have words to explain. ‘Concerning’ is not enough. This is frankly a terrifying report,” Figueres told Bloomberg Green a few days ahead of the report’s official release, speaking with apparent familiarity with its findings. “It’s not really about megatons,” she said, speaking of rising levels of greenhouse gas emissions. “It is fundamentally about the long-term wellbeing of the entire web of life on this planet.”

Figueres is a founder of the Global Optimism Group and co-author of The Future We Choose: Surviving the Climate Crisis. Her remarks in reflecting on the IPCC climate assessment have been edited and condensed for length and clarity.

What does this report mean? Where are we now?

It’s quite foreseeable that the report would underline, yet again, that we are not doing enough, neither in terms of scale or speed. This decade continues to be the decisive decade to have half a chance to close the warming gap to where we need to be. We are far from being below 2° C, let alone 1.5° C, which we now know is where we need to be to adapt nature, humans and the economy. Beyond that, adaptation would be in serious question. It could trigger the point beyond which ecosystems will simply transform irreversibly.

What’s the significance of the war in Ukraine for the energy transition? There seems to be big climate backslide and a scramble for coal, but at the same time a real chance to accelerate the push for renewables.

The way I think about the war is with the following analogy. Let us say that we have a patient who has been diagnosed with lung cancer that is quickly becoming terminal, but is not yet. That’s the situation that we have around the planet. Now we discover that one of the main sellers of the tobacco that has led to this cancer is using the income that the patients pay to commit atrocities against other people. So now we have a choice.

What does the patient do? Option one: The patient says, “I’m going to start planting tobacco in my own yard and putting together my own little rolling station at home.” Well, that has the advantage that there’s less income [going to the seller].

So if we now dig for more oil and more gas, and ramp up the completely obsolete coal plants, that has the advantage that we begin to starve the bully of their income. So that’s definitely a good thing. However, it does absolutely nothing about the health of the patient—or the health of the planet.

It is very clear that we can’t continue to depend for our energy, which is the basis of the global economy, on regimes that are completely irresponsible and completely unpredictable. But if, on top of that, we [add] climate change, now we have a double-whammy situation.

The Paris Agreement goal is now under strain. How are we going to be talking about in two years?

It’s not the Paris narrative that is under strain. It’s our inability to live up to the Paris expectations. The Paris Agreement stands. In fact, it’s only getting more and more robust because we did not have the certainty around 1.5 in 2015.

I’m lacking words for this. It’s beyond immoral. It’s suicidal. What is suicidal is our inability to take the decisions and enact the behavioral changes that we perfectly well can in order to align our planet with the Paris Agreement. That’s the problem. There is nothing new that any report can tell us about what we should be doing. The gap that we identified years ago is not closing; in fact, it’s enlarging. That’s the news. It’s tragic.

Here’s my optimistic piece. This report will remind us once again that the cancer can very well become terminal, but is not terminal yet. It’s the “yet” that I would like to emphasize. We are standing in front of the abyss, we still have the opportunity to steer away from the abyss.