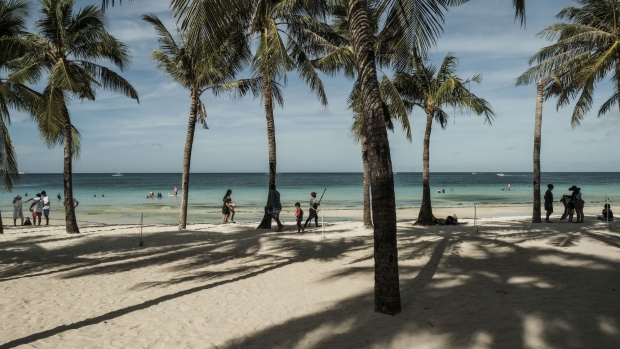 Visitors frolic on a beach in Boracay, the Philippines, in 2022. , Bloomberg

(Bloomberg) -- The year 2022 saw international travel by more than 900 million tourists, 63% of the level in 2019, before the pandemic struck. Global tourism this year should improve considerably to reach approximately 80% to 95% of pre-pandemic levels, according to the tourism recovery outlook issued by the United Nations World Tourism Organization on Jan. 17. But with increased costs and global economic uncertainty, a return to the road won’t necessarily mean the industry is out of the red.

“Economic factors may influence how people travel in 2023 and UNWTO expects demand for domestic and regional travel to remain strong and help drive the sector’s wider recovery,” said Secretary-General Zurab Pololikashvili in a release.

The Middle East and Europe, the regions recovering fastest, are predicted to meet pre-pandemic visitor volumes in 2023. But contrary to the freewheeling “revenge travel” narrative of pent-up, price-agnostic tourists, the UNWTO projects rising financial worries will see travelers seeking more value for money and staying closer to home this year.

For Europeans, price and proximity were determining factors in choosing destinations in 2023, according to a December 2022 report on consumer travel attitudes from the European Travel Commission. As with the UNWTO, value for money is now the overriding decision factor.

It’s the same story in the US. Half of American travelers say concerns over their financial situation will impact travel decisions in the coming six months, according to a January 2023 sentiment survey from tourism market research firm Longwoods International; 56% of respondents point to the price of airfare as a major factor. Some 30% say economic concerns will “greatly” impact their travels in 2023, up seven points since late August 2022.

In spite of economic concerns, nine out of 10 American travelers in the Longwoods survey say they have plans to travel within six months. Destination Analysts reported similar findings in January: A December 2022 survey of American travelers confirmed that while demand is high, increased travel costs are a growing deterrent. Half said the high price of travel had kept them from traveling in the previous month, while 31% said inflation in general and high consumer prices led them to cancel an upcoming trip.

On a road trip, this might translate into packing sandwiches for a motor journey instead of stopping at a restaurant, Eylon adds, or staying at a limited-service hotel property instead of full-service one. “This is the exact same pattern that we saw when gas prices hit record highs in the United States last summer.”

A quarter of Americans also say they will drive rather than fly, and up to 30% say they will choose a destination closer to home, the Longwoods survey shows. This is pattern is typically associated with economic downturns, Eylon says.

Still, demand from the US for trips to Europe remains strong, the UNWTO says, noting the dollar’s strength against the euro; a big rally for the euro could curb appetites. The return of Chinese travelers will also boost the tourism industry’s recovery in 2023, but it’s unclear how much. As of mid-January, the UNWTO confirms, 32 countries have imposed entry restrictions on Chinese travelers.