The price of oil is the linchpin to get Alberta's economy back on track: Economist

If any place in North America should have been prepared for the crash in oil prices, it’s petroleum-rich Alberta, the Saudi Arabia of Canada.

Back in 1976, Alberta’s government established a special fund to save some of its oil and gas revenue for leaner times when prices dropped or resources ran dry. For decades, royalties poured into Alberta’s coffers, with the gusher accelerating in the boom of the early 2000s as the province developed its vast oil-sands reserves, the world’s third-largest oil resource.

But successive governments failed to stick to the savings plan. Today, as weak oil prices upend economies around the world, Alberta is confronting its own painful regrets.

Had it set aside more during oil’s boom, Alberta could have had a $575 billion (US$433 billion) wealth fund to cushion the blows of COVID-19, according to one economist’s estimates.

Instead, the Alberta Heritage Savings Trust Fund is down to just $16.3 billion after losing $1.9 billion because of the pandemic and a wrong-way bet against market volatility.

That’s not enough to provide much help in a province suffering from Canada’s second-highest unemployment rate at 15.5 per cent, a falling credit rating and a dark period ahead for its most important industry.

“Many people in Alberta might not even realize that the Heritage Fund still exists,” said Trevor Tombe, an economics professor at the University of Calgary. “The fact that there is such a large missed opportunity, that had we been saving royalties we could have had a fund in the hundreds of billions, is not widely appreciated.”

Tombe’s estimate that the Heritage Fund could have been worth $575 billion uses the fund’s actual investment returns but assumes that the province had followed practices similar to those that helped Norway amass its US$1.12 trillion Government Pension Fund Global. Those guidelines include contributing all of its resource revenue to the fund and withdrawing only 4 per cent a year.

Norway plans to exceed that cap this year, withdrawing about 4.2 per cent of the fund, or roughly US$37 billion, to shore up its budget.

Despite striking oil about half a century earlier than Norway, Alberta has no similar piggy bank to crack.

With the oil crash devastating resource and income tax revenue and spending soaring to keep the economy afloat, Alberta Premier Jason Kenney has estimated the province’s deficit could hit about $20 billion in the current fiscal year. That’s on par with the latest deficit estimate from Ontario, a province with three times as many people.

Prior to the crisis, Alberta was producing about 3.8 million barrels a day, more than every OPEC member other than Saudi Arabia and Iraq. Analysts have estimated that Alberta’s producers idled 1 million to 1.5 million barrels of production at the depths of the crisis, and it’s unclear how much has been brought back on since the North American economy began to reopen.

“If we don’t get people back to work, if we don’t restore investor confidence and get our economy growing again, the fiscal challenge will become insurmountable,” Kenney said in late June.

The Heritage Fund, which initially received 30 per cent of Alberta’s non-renewable resource revenue, was meant to transfer the province’s oil wealth to future generations, not serve as a rainy day fund or as a vehicle for diversifying the economy, said Colleen Collins, who worked in Premier Peter Lougheed’s office as he set up the fund in the late 1970s. Collins now serves as a vice president at the Canada West Foundation, a think tank.

In 1987, the provincial government stopped adding resource revenue to the Heritage Fund as low oil prices caused mounting deficits. The fund has limped along since, contributing investment income to the province’s general revenue pool while receiving occasional, ad hoc infusions during better times.

“There was this sense of ‘Well, it’s a rainy day fund and man is it rainy,’” Collins said. “Nobody wants to see services cut. Nobody wants to see public servants’ salaries cut. How do you say no to people when you have all that money in the bank?”

Alberta politicians have argued that a giant Heritage Fund might have become a fat target for the federal government, continuing a long series of intergovernmental clashes over control of the province’s oil resources and the wealth they generate. As a unitary state, Norway hasn’t faced any such tensions, she said.

The University of Calgary’s Tombe concurs, saying that the federal government likely would have reduced its transfers to Alberta or raised other taxes affecting the province, making the Heritage Fund smaller than his calculations project it could have been. 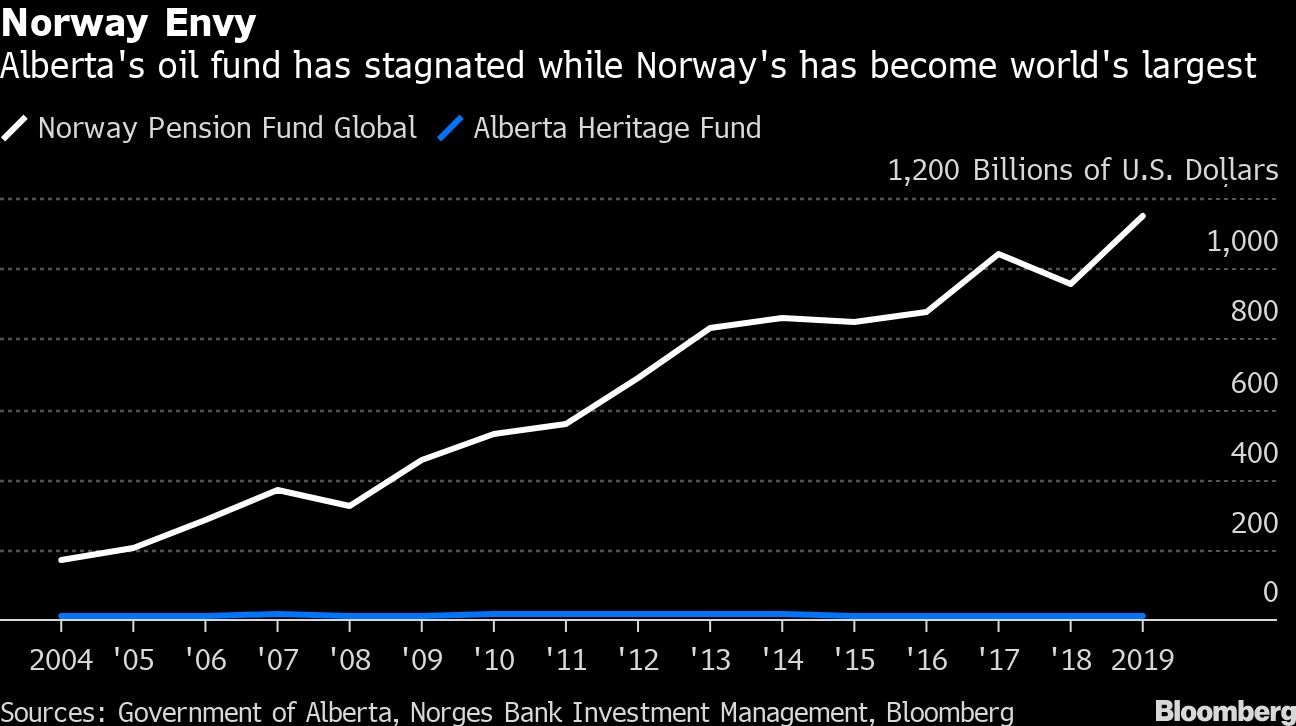 Still, Alberta’s politicians may have been lulled into false sense of financial security by a long stretch of good times and bullish projections that the U.S. and China would be ready buyers for the province’s crude for decades to come.

The province, which has been governed by various conservative parties for about 81 of the past 85 years, has the lowest corporate tax rate in Canada, relatively low personal income-tax rates and is one of the few North American jurisdictions without a provincial or state sales tax. Even with low taxes, the rise of the oil sands in the 1990s allowed Alberta to post 14 consecutive years of budget surpluses before the streak was ended by the 2008 financial crisis.

The province held onto its AAA credit rating even longer than the U.S. did. S&P Global Ratings didn’t downgrade it until 2015. S&P has cut it three more notches since, to A+. Some have called for Kenney’s pro-oil government to work on an economic plan that isn’t so dependent on fossil fuels.

The odds that the province will seek increased contributions from the industry are low, and the exploding budget deficit makes the chances slim that it will divert revenue to build up the Heritage Fund.

Tombe recommends starting by contributing a small fraction of the province’s resource revenue to the fund and increasing that percentage over time. The lost revenue could be made up by raising tax rates elsewhere or implementing a sales tax.

Either way, he hopes that the lessons of the current pandemic crisis aren’t lost on Alberta.

“The scale of the economic disruptions and the fiscal disruptions are so big that I think it is genuinely leading people to think we need to do something differently,” Tombe said. “And if an event like this does not cause us to change how we’re doing things, I don’t know what will.”