The outbreak came early to British Columbia, in January, and public health officials braced for the worst. Now the Canadian province has one of the lowest death rates in North America.

“I thought we were going to be dealing with something unprecedented in that region specifically, but then it didn’t happen,” said Jason Kindrachuk, a virologist at the University of Manitoba.

British Columbia’s success story shows how tried-and-true methods — when paired with strong public health agencies — can have sweeping impact, according to Kindrachuk and other scientists. Many governments embraced technology, with the U.K. using drones to help police enforce lockdowns and South Korea tapping location data from mobile carriers and credit-card transactions to track infections.

B.C. stuck to old-fashioned basics, alerting primary care doctors by fax about how to be on the lookout for the novel pathogen and tracing potential transmissions through interviews. Data compiled on May 13 show the province’s COVID-19 death rate was three per 100,000 residents, better than almost anywhere in North America and much of Europe.

Local officials would be the first to say that luck surely played a role. But British Columbia also had stockpiles of equipment along with the benefit of a public-health system making communication and coordination smoother than in U.S. states. And it had a provincial health officer, Dr. Bonnie Henry, with the power to order doctors and hospitals to take certain steps, such as cancelling elective surgeries, which she did early on to free up beds.

Henry’s soft-spoken authority — she’s on TV every day, often repeating her mantra, “Be kind, be calm, be safe” — won over British Columbians. When her favourite local shoe designer offered a limited edition Dr. Bonnie Henry Mary Jane heel (US$240 a pair with all profits going to food banks), the website crashed.

“She was able to galvanize the public across British Columbia to understand that this was something new and very different,” Kindrachuk said.

Like other countries, Canada has an uneven history with infectious diseases. In 2003, the country’s first SARS cases appeared at hospitals in Vancouver and Toronto on the same day. Vancouver quickly contained transmission, while Toronto would suffer the worst outbreak outside Asia.

An independent commission later noted that Vancouver’s public health system had swiftly put emergency rooms and physicians on the lookout for unexplained fevers and immediately scaled up protective gear for health workers.

In Toronto, Henry, then that city’s associate medical officer of health, tried to issue warning of the emerging SARS epidemic in Hong Kong, but her office’s email-distribution list wasn’t extensive enough and many doctors missed the alerts.

In British Columbia, she became the top health official in 2018 and has been in charge of the province’s rapid mobilization to contain the virus. Within days of Chinese researchers releasing the genetic sequence of the virus on on Jan. 10, the province became one of the first in the world to develop a test. A week later, before Case One in B.C. emerged on Jan. 26, it had the chemical reagents necessary to carry tests out, said Reka Gustafson, deputy provincial health officer. 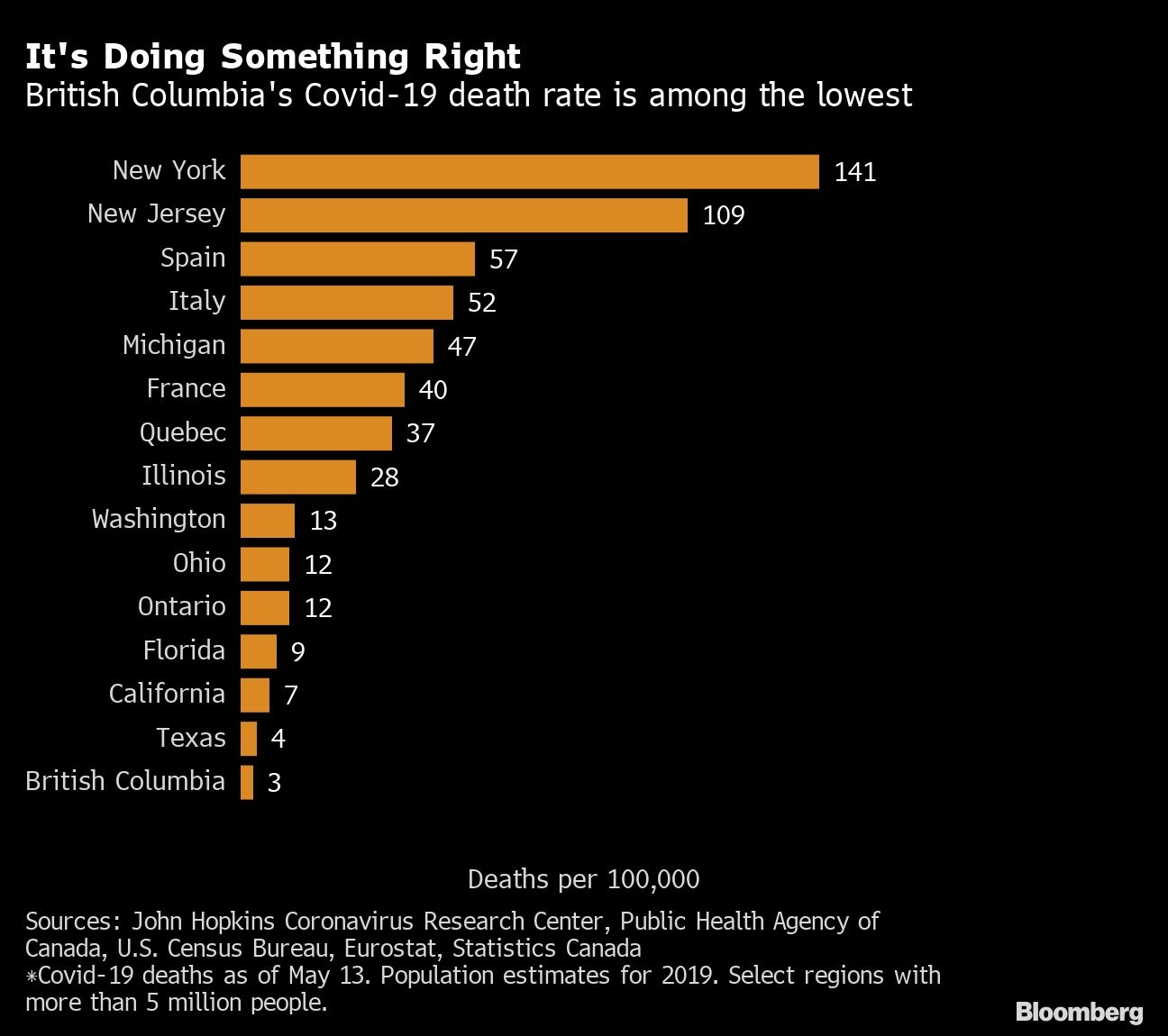 Early testing helped the province pounce on transmissions before they spiraled, crucially at long-term care facilities. Canada has the highest share of COVID-19 deaths in care homes, according to an international study of 13 countries published on May 3, a disturbing distinction fueled by facilities in Ontario and Quebec that have been ravaged by the virus.

British Columbia commandeered nursing homes at the first sign of infection, barring visitors. Employees were forbidden from working at more than one facility, a move other Ontario and Quebec didn’t make until later in the crisis.

The ability to manage nursing-home outbreaks played a key role in limiting deaths in B.C., said Patricia Daly, chief medical health officer for Vancouver Coast Health, one of the regional public-health authorities. “We could get in and get in front of it.”

Some steps defied the prevailing wisdom at the time. The province didn’t attempt the mass testing South Korea did and, unlike the government in Wuhan, China, didn’t aggressively hospitalize those confirmed positive, sending 80 per cent of cases home to recover.

Henry has become the public face of the crisis. A former military doctor who helped track down Ebola infections in Uganda earlier in her career, she also personally handled the contact tracing of Patient Zero’s family in Toronto’s SARS outbreak.

“She’s really been trained for this,” says Perry Kendall, her predecessor. “She’s not scared of giving orders.”

British Columbia’s top politician, Premier John Horgan, has taken a back seat in the public eye; it’s Henry who presides over daily briefings.

That has been key, said Peter Berman, a public-health expert at the University of British Columbia. “The same scientist who was empowered to lead this effort also has the authority to issue instructions.”

Henry is the first to caution against complacency. “We don’t know what is going to happen with this virus,” she said at a recent briefing, where she underscored how the province could quickly lose all the gains it’d made by easing restrictions too far. “We need to hold the line.”