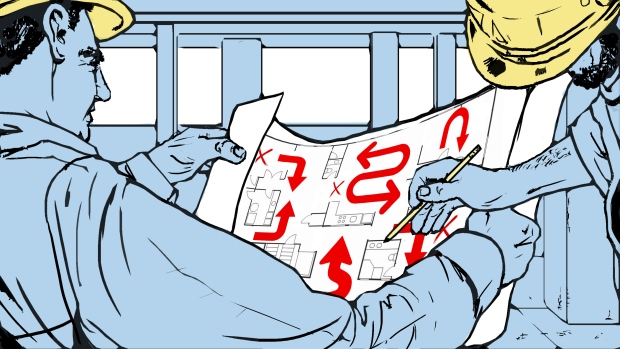 The headquarters of Toronto-based cloud accounting company FreshBooks doesn’t occupy a typical office footprint. It’s a sprawling 75,000-square-foot, open concept, brick-and-beam space that used to be a storage facility. And before that, a hockey puck factory.

The firm’s chief people officer said she doesn’t expect the workplace to ever fully return to the way it was pre-pandemic, before nearly all of the company’s 400 employees started working from home.

“I keep hearing people [saying]: ‘Will it get to normal?’ It’s not going to be like it was before,” Sue DiPoce told BNN Bloomberg on the phone, speaking while alone, save for one or two other people, one May morning from her office.

As the person responsible for everything to do with the employee experience at FreshBooks, from onboarding new hires to the culture and the facilities, DiPoce is grappling with the question of what the workplace will actually look like when people do eventually return to the office.

That’s a concern of executives across the country, many of whom have had to urgently adjust the way their companies do business.

Reopening workplaces: The balancing of medical and economic outcomes

BNN Bloomberg speaks with Anita McGahan, professor at University of Toronto's Rotman School of Management, about the challenges of reopening economies, particularly workplaces, as the pandemic continues.

“The future is now for many industries that in normal circumstances may have taken a while longer to adopt new digital platforms, to embrace new working models for workers, to embrace skills development and training within the workplace, to adapt to rapid change,” said Pedro Barata, executive director of the Future Skills Centre, in a phone interview with BNN Bloomberg. The centre is a federally-funded research hub focused on equipping Canadians with skills to succeed in the labour market.

From the wide-scale adoption of remote work, to the proliferation of retailers offering curbside pickups, there’s no industry unaffected. There's even a Canadian bank considering closing off microwaves and fridges, and a commercial landlord that bought 200 litres of hand sanitizer for tenants preparing to reopen.

“This is the first time that organizations have been forced all at the same time to actually rethink work completely: how it’s done, what’s a priority, who does what, how people are managed — everything,” said Paula Allen, senior vice-president of research, analytics and innovation at human resources firm Morneau Shepell, in a phone interview with BNN Bloomberg.

Allen is also the company’s business response and resource lead for the COVID-19 pandemic, and served in a similar capacity during the 2009 H1N1 pandemic.

“[The crisis] makes it very crystal clear what is truly essential to get work done — what are the things that you need to invest in, what are the tools that your people really need to have,” she said.

Allen added the physical workplace is going to change, or is already changing, significantly. She said open workspaces that do not allow for much separation between people need to be rethought for the long-term. In addition, employers might want to consider providing or installing more protective equipment and barriers, staggering shifts and offering more flexibility in terms of working remotely.

In the case of FreshBooks, DiPoce said the workplace will need to change to allow for more distancing, and cleanliness will be a priority.

“We’re going to have to alternate the desks. We may have to configure the desks or get smaller desks because we don’t have space for all of them,” DiPoce said, noting that people returning in stages will alleviate some of this concern.

DiPoce said she’s also considering marked pathways like the ones now found in grocery stores, which, she acknowledges, might seem foreign in an office setting. But it may be necessary so that people are aware of what sufficient distancing looks like.

DiPoce said there is a silver lining to the daunting challenge she and other business leaders around the world are facing.

“I see it as a huge opportunity for companies to have a work-from-anywhere workplace. It can be done, and it can be done really, really well,” she said.

“What that does, that opens up a huge talent pool in terms of a footprint. That will be the biggest differentiator for companies and workplaces who can do that well.”

‘Giving people a sense of control’

Succeeding in the post-COVID-19 world hinges on more than the physical considerations. Business leaders may also need to rethink their company culture and how they can better support their workers.

“The focus on supporting employee well-being and mental health, and how critical that is to your business’s sustainability, has never been clearer,” Allen said. “This is something that gets recognized by investors. It’s clear your business resilience has a lot to do with how you support your people."

In Morneau Shepell’s Mental Health Index report released last month, 80 per cent of the 3,000 Canadians surveyed said the pandemic has had a negative impact on their mental health. The number-one concern was financial uncertainty (55 per cent), followed by fear of the death of a loved one (43 per cent).

While not all employers are in a position to dole out raises, they can support their people by other means, according to Allen.

“It’s not just about giving money. But it is about giving people a sense of control,” Allen said. “So giving them tools, information, approaches, services to help them plan what their contingencies are.”

Barata of the Future Skills Centre said the benefit to employers of investing in the well-being of their people is a more resilient, productive and loyal workforce.

“In the midst of the crisis and the real human tragedy that’s happening, there are opportunities to actually start to think about how we invest more in our workers and their learning agenda,” he said.

“It’s going to be good not just for the overall economy. [It will help companies] get out of the hiring revolving door and just build a workforce that’s loyal and that sees itself as valuable.”

This is the first instalment in 'The Evolution of the Workplace,' BNN Bloomberg's weekly in-depth series looking at how workplaces in Canada are changing due to the COVID-19 pandemic.