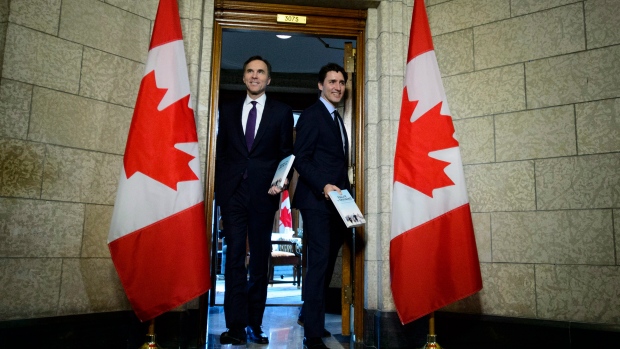 Minister of Finance Bill Morneau walks with Prime Minister Justin Trudeau as they leave his office on route to deliver the federal budget in the House of Commons on Parliament Hill in Ottawa on Tuesday, Feb. 27, 2018. , THE CANADIAN PRESS/Sean Kilpatrick

Federal Finance Minister Bill Morneau tabled a budget in the House of Commons Tuesday afternoon, focusing on gender equity, science and reconciliation with First Nations – but left Ottawa with no timetable for balanced books anywhere on its horizon.

Here’s a look at how some experts are reacting to the 2018 federal budget on BNN:

The missed opportunities in budget 2018

“Everyone who knows and talks about getting more women into the workforce, there’s just one thing. It’s got to be more affordable and available childcare. Until you do that, you’re not going to change the number of women getting into the workforce much at all. I think they overplayed saying this is a ‘gender budget.’ They’ll have to do a bit of catch-up on that.”

Frances Donald, senior economist at Manulife Asset Management joins BNN's Paul Bagnell for her reaction to Budget 2018 and why she's concerned growth seems to be out of the picture in the budget.

“Benevolent, or benign, wait and see. There really isn’t very much in this budget that’s going to change a) the perception of federal finances in Canada or b) anyone’s growth prospects, either for the short term or the long term. That might not be such a bad thing. It means there’s dry powder to the side right now to respond to the downside shocks, changes in U.S. tax policy or any kind of movement in the future that requires a policy response from the government.”

“I think this is a pretty tame budget. Not a lot of surprises… I think the biggest overarching issue here is what’s missing … competitiveness, NAFTA. There’s this overarching anxiety hanging over our country right now. Whether or not the numbers look okay, we’re still worried about this competitive disadvantage vis-à-vis the United States, our largest economic competitor. So I think there might have been some hope that we’d see some kind of a signal, whether through future or immediate tax changes, something that would give a signal to business that this government absolutely recognizes that we are at a competitive disadvantage.”

"Wherever they saved some money -- because they didn't spend it on infrastructure, which was previously allocated; they just couldn't get it out the door because they couldn't get it out the door -- they turn out and spend it anyway. These are the kind of things that those of us who were looking for more fiscal discipline would've said, if I was playing poker, 'that's a tell. I know what you're going to do when you play this hand. It's a tell.'"

Jean-François Perrault, chief economist at Scotiabank, joins the BNN Budget 2018 Panel for his thoughts on the 2018 federal budget.

“What we saw in the budget is that they’re spending lots of money, $20 billion of additional money in the next five years, on very important things - you know gender issues, environmental issues, innovation. But they haven’t kept any powder dry for any uncertainties that may arise.”

Bruce Croxon, co-founder of Round 13 Capital and Rona Ambrose, global fellow at the Wilson Center's Canada Institute, join BNN's Budget 2018 Panel and host Amanda Lang for reaction to the 2018 budget.

"The deficit in 17/18, the current fiscal year, is actually going up relatively to 16/17: it was $17.8 billion in 16/17 and it's jumping to $19.4 billion. While it starts to fall again in subsequent years, I think it's a real signal that, unless the government gets things under control, the risk is the return to balance just keeps getting pushed out another year, another year... As we approach the election, the pressure for subsequent years to go up is only going to heighten, so I think this is a missed opportunity to start to put some meat on the bone around a planned deficit and I'm zeroed in on this increase year-over-year. I think that's a real signal of where we may be heading." 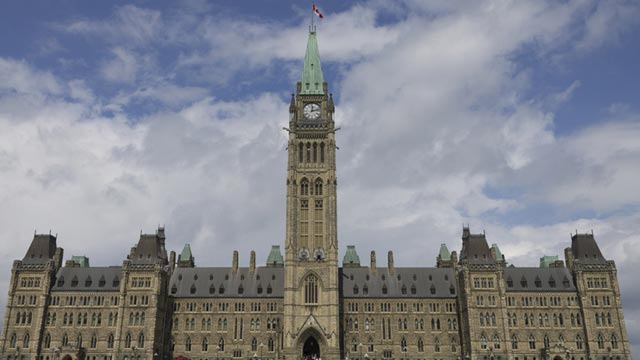