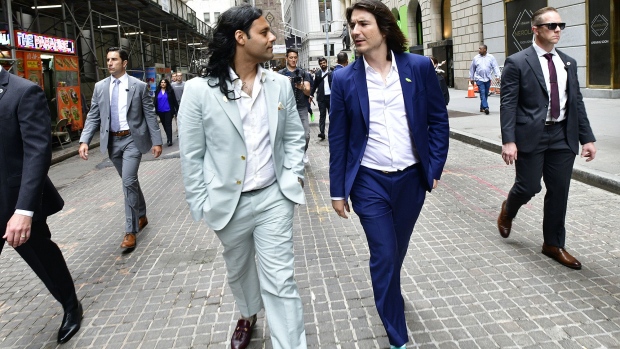 (Bloomberg) -- A little over a year ago, things seemed to be going in the right direction for Robinhood Markets Inc.

The online brokerage with a Silicon Valley pedigree had just wrapped up a period of meteoric growth, surpassing 12.5 million users, and was charging toward an initial public offering that would make its then-billionaire founders many times richer.

Then, on Jan. 28, 2021, everything changed. Hordes of retail investors, many of whom got their introduction to trading on Robinhood’s app, ushered in the meme-stock era by plowing into struggling stocks such as GameStop Corp. and AMC Entertainment Holdings Inc., and sending them into the stratosphere.

Robinhood, lacking an adequate financial buffer, got caught flat-footed. It was forced to draw down credit lines, raise billions in fresh capital and limit trading in some stocks, setting a stage for a congressional hearing in the ensuing weeks. The company and its leaders managed to weather the upheaval, and the massive trading volumes that persisted throughout the first half of last year helped to sell investors on its story, culminating in a late July IPO at $38 a share. Within a week, the stock surged above $70.

Read more: Robinhood Is Said to Draw on Bank Credit Lines Amid Tumult

But it’s been a rugged ride ever since, and Robinhood’s troubles have piled up: User growth and engagement have slowed; the company has yet to deliver some of its most enticing product ideas; the firm’s initial rollout of cryptocurrency wallets coincided with a sharp drop in the price of Bitcoin and other digital tokens; and Robinhood shares have cratered, leading to a raft of class-action lawsuits.

With the brokerage set to report fourth-quarter results after markets close Thursday, investors will be looking for signs of a turnaround.

“People forgot the fundamentals in this business,” said Hugh Tallents, a senior partner at consulting firm CG42. “They were given a rude awakening.”

Robinhood is expected to report an adjusted net loss of $334.6 million on revenue of $370.9 million, according to the average estimate of analysts surveyed by Bloomberg. That’s about $46 million more than the company’s earlier revenue forecast, when it warned that trading activity could remain lower during the final three months of the year.

The stock, meanwhile, has gotten crushed, plunging 67% since its late July debut to close Wednesday at a record low of $12.41. Shares of more entrenched brokerages have rallied in that span, with Charles Schwab Corp. surging 33% and Interactive Brokers Group Inc. rising 7%.

As a result, Robinhood Chief Executive Officer Vlad Tenev and fellow founder Baiju Bhatt have fallen from the ranks of the world’s billionaires, according to data tracked by the Bloomberg Billionaires Index.

The decline preceded multiple class-action lawsuits alleging Robinhood misled investors about its prospects for revenue growth and didn’t do enough to ensure the reliability of its platform. Late last year, in a major privacy breach, a customer-service representative unwittingly gave a hacker access to the personal information of about 7 million customers.

Tenev, 34, and Bhatt, 37, the firm’s chief creative officer, also made a crucial bet on crypto wallets, which allow users to send or receive virtual currencies. The rollout began earlier this month with 1,000 customers getting access and plans to expand to 10,000 by March. While analysts see digital wallets, which allow customers to send and receive virtual currencies, as a potential engine for growth, Robinhood is lagging behind competitors on that front, including Coinbase Global Inc.

Despite the challenges, Robinhood commemorated the anniversary of the GameStop debacle by listing improvements it has made over the past year. The firm shored up its capital reserves and now has a net $2.8 billion on hand, or 21 times the amount required by the U.S. Securities and Exchange Commission.

Robinhood had 22.4 million funded accounts as of Sept. 30, nearly doubling its user base from a year earlier. It bulked up its customer-support staff, added phone support and purchased Say Technologies -- a business that allows investors to submit questions to public companies for earnings conference calls, including Robinhood itself.

Whether Robinhood can continue to grow will hinge on its ability to deliver the new business lines it has teased, especially tax-advantaged retirement accounts, according to Julie Chariell, an analyst at Bloomberg Intelligence.

“They say they’re working on it but it’s not clear how soon it’s coming,” Chariell said. “To grow, they need to start adding more products that are not so dependent on day-trading.”

Chariell is among those who see Robinhood as a potential takeover target, given its significant lead over competitors when it comes to the use of its mobile app. The firm had about 16.4 million monthly active app users during the fourth quarter, about 30% more than a year earlier, according to estimates from Sensor Tower. Schwab and Morgan Stanley’s E*Trade had 2.6 million and 1.6 million, respectively, according to Sensor Tower’s estimates.

“It would be a very attractive takeout target given its pure mobile app base,” Chariell said.