The activist investor pushing for change at Canadian National Railway Co. has outlined its plan to improve returns at Canada’s largest railway with a greater focus on efficiency under a new chief executive officer.

TCI Fund Management Ltd., which is run by billionaire Chris Hohn, spelled out in a presentation Monday how it believes Canadian National can improve its operations and culture and reduce costs. TCI argues in the 102-page document that it’s imperative for CN to make changes now after its smaller rival, Canadian Pacific Railway Ltd., agreed to acquire Kansas City Southern.

“CP will be a much stronger competitor, so CN needs to raise its game urgently to prepare for a tougher competitive environment,” TCI said in the presentation, a copy of which was reviewed by Bloomberg News. 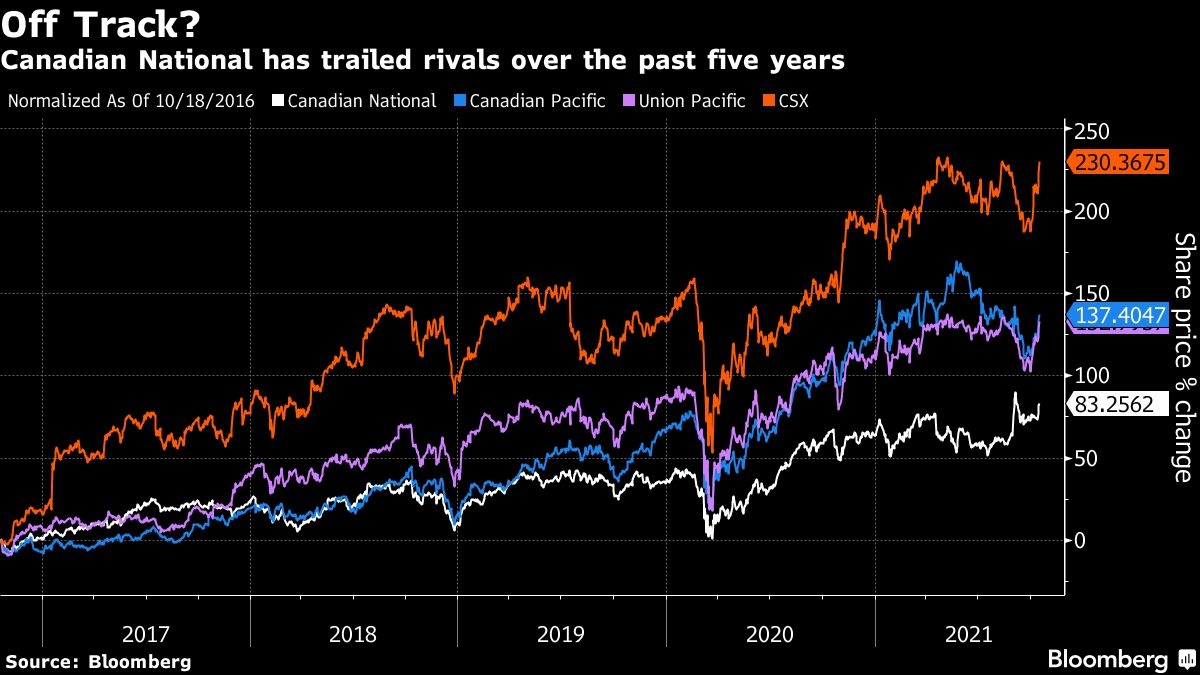 TCI, which owns more than 5 per cent of Canadian National, argues that CN’s priority should be to expand the business. The firm said the railway needs to invest in its network and technology to create more capacity, improve fluidity and connect new customers to the railway.

The fund also says CN needs to aggressively market itself to customers as an environmentally friendlier alternative to trucks.

In its presentation, it again called on CN to appoint its four director nominees to increase the board’s industry expertise. It also urged the board to replace Chief Executive Officer Jean-Jacques Ruest, who has a marketing background, with former Chief Operating Officer Jim Vena, whose career has been focused on railway operations.

A representative for CN wasn’t immediately available to comment on the presentation.

CN has been locked in a battle with the London-based TCI since August, when the firm raised concerns about the railway’s doomed pursuit of a US$30 billion takeover bid for Kansas City Southern. TCI has argued the takeover would never get approved by regulators and exposed CN to potentially US$2 billion in fees it would have to pay.

After TCI announced it would wage a proxy battle, CN unveiled a plan to cut spending, streamline management and buy back CUS$5 billion (about US$4 billion) of stock next year. It has accused TCI of having a conflict of interest because it’s the largest shareholder in Canadian Pacific. A shareholder meeting is scheduled for March 22.

Canadian National also said it was paid a US$700 million termination fee after Kansas City Southern opted for the Canadian Pacific deal. It said TCI is misleading investors and argues it has the right management team and plan in place to improve its performance.

TCI argues that Canadian National’s board has failed to hold Ruest accountable for its deteriorating operating ratio -- an important measure of a railroad’s efficiency that measures total operating costs as a percentage of revenue. CN went from having the best operating ratio among top-tier railways in 2017, prior to Ruest’s appointment, to the worst today, the fund said.

The fund says in the presentation that Canadian National needs to optimize its network and supply chain to improve service, capacity, safety and reliability. after similar measures were implemented at rivals Canadian Pacific and CSX Corp., they yielded rapid results, the fund said.

In order to achieve that, the company needs change at the top, TCI says. “CN’s cost structure, service and growth can quickly return to the best in the industry,” the presentation says.