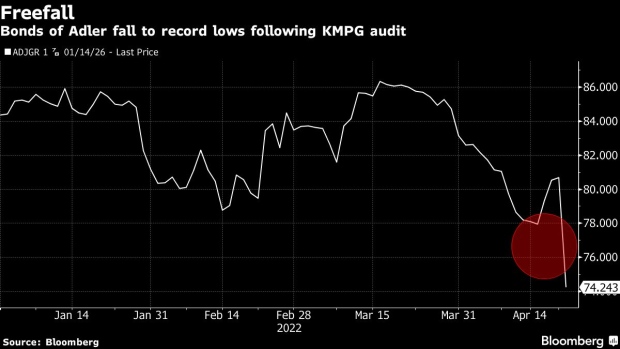 The Adler Group SA Wilhelm retail and residential construction project in Berlin, Germany, on Tuesday, Nov. 2, 2021. A major landlord in Germany, Adler has aggressively sold assets to help prop up its balance sheet, putting about 40% of the company’s portfolio on the block. Photographer: Krisztian Bocsi/Bloomberg , Bloomberg

Adler Group’s 4.5 billion euros ($4.8 billion) of bonds extended losses following publication of the report, with some notes quoted as low as 73 cents on the euro. Meanwhile, the cost of insuring the real estate firm’s debt jumped to indicate a roughly 60% chance it will default within five years, up from 50% on Friday, according to ICE data.

Bondholders had been awaiting the results of the forensic audit Adler commissioned in response to claims of fraud by short seller Fraser Perring last year. While KPMG’s 125-page document stopped short of alleging fraud, it included a string of damaging claims, including a 411.8 million-euro valuation differential for some of Adler’s development projects.

“While these revelations are not surprising for those of us that have been following Adler Group closely, they still come across as shocking for a listed company,” said CreditSights senior analyst David Shnaps in a note to clients on Monday.

The lack of disclosure suggests more fact-finding could potentially be on its way from regulatory authorities, he said.

Adler’s 700 million euros of bonds due January 2026 fell more than 7 cents on the euro to about 73 cents on Monday, the lowest since they were issued last year. The company’s bonds retraced an initial rally on Friday to close lower as investors digested KPMG’s findings and Adler’s management said they were vindicated by the report.

More than 50 million euros of Adler bonds traded on Friday, mainly among distressed debt investors, according to a note from Citigroup analysts on Monday.

Investors are also scrutinizing potentially problematic assets on Adler’s balance sheet. The KPMG report said that Adler holds some bonds of Aggregate Holdings SA. Aggregate is a key investor in Adler and has been accelerating non-core asset disposals in a bid to reduce debt and counter soaring financing costs in recent months.

Adler significantly increased its stake in Aggregate’s 600 million euro bonds in September last year, the report showed, citing advantageous pricing and very attractive interest rates. That bond is trading at around 45 cents on the euro, according to Bloomberg pricing.

Adler’s holdings of Aggregate’s bonds could exceed 100 million euros, Citigroup analysts said in a note to clients on Monday.

“We are also surprised that the company is not certain whether it will receive a clean audit opinion,” the analysts said. “Should that be the case, we think this will increase the doubt over the quality of the reporting of the company and increase the pressure on its bonds.”

Adler is due to report its full-year earnings on April 30. Its shares fell as much as 9.6% on Monday to 10.6 euros, the lowest in more than two months.