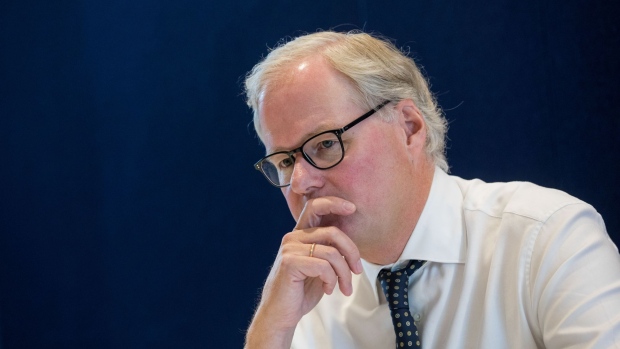 Lard Friese, chief executive officer of NN Group NV, pauses during an interview in London, U.K., on Thursday, Aug. 30, 2018. NN operates as an insurance and investment management company offering services to the customers in the Netherlands. , Bloomberg

(Bloomberg) -- Aegon NV’s sale of its central and eastern European business has attracted interest from KBC Group NV and NN Group NV, people with knowledge of the matter said.

Amsterdam-listed Aegon is entertaining final offers for the unit until Monday, according to the people, who asked not to be identified because the information is private. Vienna Insurance Group AG has also been considering an acquisition of the operations, the people said.

The business has a presence in Poland, Hungary, Romania and Turkey. A sale could fetch more than 500 million euros ($598 million) for Aegon, the people said.

Aegon Chief Executive Officer Lard Friese, who took on the role in March, is battling a share price that has fallen almost 25% this year. The former CEO of NN Group has said Aegon could pull out of some markets as he seeks to turn around the company’s performance.

Bidders are most attracted by Aegon’s Hungary business, the people said. NN Group’s bid could be complicated by the fact that it has an activist shareholder, Elliott Management Corp., pushing for capital returns rather than acquisitions.

No final decisions have been made, and there’s no certainty the discussions will result in a deal, the people said. Representatives for Aegon, NN Group and Vienna Insurance declined to comment. A spokesperson for KBC said the group was always interested in opportunities and bolt-on acquisitions in its core markets, declining to comment further.

Aegon is joining AXA SA and Aviva Plc in seeking to exit peripheral businesses. Vienna Insurance’s cross-town rival Uniqa Insurance Group AG closed the purchase of AXA’s eastern European business for 1 billion euros in October. Aviva CEO Amanda Blanc said this week that the company was in the early stages of considering options for businesses in countries including Poland.