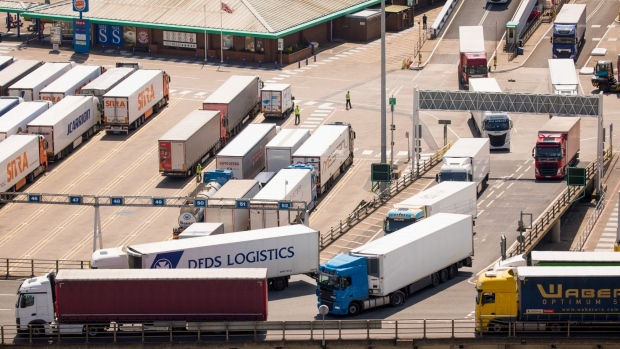 Lorries arrive from a ferry at the Port of Dover on May 27, 2020. Photographer: Jason Alden/Bloomberg , Bloomberg

(Bloomberg) -- U.K. companies exporting into the European Union will have to wait for permission from tax authorities before they can move their goods under plans being drawn up by the government.

According to a document circulated by Her Majesty’s Revenue and Customs, lorries will only be able to move loads into the EU if they have a valid reference from the so-called Goods Vehicle Movement Service, a new and untested IT platform that is still under development.

Hauliers will need to file the correct customs paperwork electronically in advance in order to get approval. The government plans to bar trucks without clearance from reaching ports -- although the document gives no details how that will be enforced.

The government is racing to avoid snarl-ups at the border with its biggest trading partner as Britain’s final split with the EU threatens to disrupt the current seamless flow of trucks across the English Channel. Delays caused by missing paperwork could cause miles-long queues at vital ports such as Dover and spell economic pain.

The U.K.’s track record on flagship IT projects is checkered, with major projects affecting areas from welfare to army recruitment delivered late and over-budget. Most recently, Boris Johnson’s government had to abandon plans for what the prime minister promised would be a “world-beating” coronavirus contact-tracing app.

“We are regularly engaging with industry as plans develop, in particular with regard to a new IT system that will facilitate movement at the border,” HMRC said in a statement, which didn’t address when the GVMS will be ready or whether it will be tested before use.

With Britain still inside the EU’s single market and customs union during the Brexit transition period, freight is able to move between the two without the need for customs declarations. When Britain formally completes its split from the EU on Jan 1. 2021 -- and regardless of whether they agree a free-trade accord -- customs declarations will be required on exports to the EU. They will also be required on imports from the bloc as of July 2021.

The paperwork problem is particularly acute for ports like Dover, where as many as 10,000 trucks arrive daily and currently drive straight out of the port without the need for documentary checks. There is very limited room to park vehicles at the port, meaning it would be impractical to check papers at the dockside. So the government is creating a so-called pre-lodgment model, where documents are submitted electronically in advance.

“We have designed a new alternative model” that will “achieve full customs control on EU goods from July 2021 whilst recognizing the practical realities of high-volume EU-facing locations with limited space to physically hold goods,” HMRC said in the document.

The government has been facing criticism from logistics firms for the lack of clarity over its post-Brexit border plans. The industry has just six months to prepare for any changes and still hasn’t been given full details. The Cabinet Office has said it will set out its plans for the border in mid-July, and is planning a “shock and awe” advertising blitz later in the year to urge businesses to prepare.