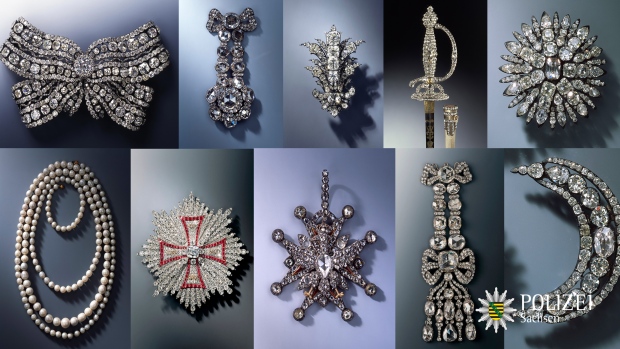 A day after burglars made off with priceless jewels from a German museum, pressure is growing on police to find the culprits. One big reason: The diamond-encrusted dagger, pearl necklace, and dozens of other glittering artifacts — estimated to be worth more than US$1 billion by the local press — were uninsured.

The German state of Saxony, the owner of the Green Vault museum in the eastern city of Dresden, carried no insurance on the jewels, standard practice because the premiums typically exceed potential damages in the long-term, the state Finance Ministry said Tuesday.

While public museums usually insure works of art that are loaned to other institutions, they often don’t take out policies on their permanent collections, according to Julia Ries, head of fine art and jewelry at insurer Ergo Group AG.

“The budgets of public museums are limited,” Ries said. “You can’t replace such a collection from a monetary or art-historic value. If the jewels aren’t recovered, this part of the collection will be lost forever.”

The insurance shortfall was revealed as more details of the theft became clear. Police believe the burglars set a fire nearby to create a power outage, then broke a window to enter the museum. Though the total number of culprits is unknown, two people quickly smashed a display case, snatched the loot, and fled.

Here’s how the robbery went down early Monday:

• Shortly before 5 am: Streetlights in the area go dark after someone sets fire to an electrical junction box.
• About the same time: Thieves cut through a metal grate covering a window and break the glass to enter the museum.
• 4:57-4:58 am: Two people enter the Green Vault’s jewelry room. One, wearing a headlamp, shatters the display case with an ax to remove the gems.
• 4:59 am: The two security officers on duty spot the burglars on camera and call the cops.
• 5:04 am: Police arrive at the scene, but there’s no trace of the thieves.
• 5:09 am: Sixteen police cars are dispatched throughout Dresden to look for the getaway car — believed to be an Audi A6 sedan.
• Around 5:15 am: Police are notified that an Audi A6 is burning in a nearby underground garage.
• Monday morning: After the fire is extinguished, Dresden police search the museum and garage for further clues, but haven’t apprehended the criminals.

Bild, a daily tabloid, reported that the jewels are worth about 1 billion euros (US$1.1 billion), without saying where it got the estimate. Museum officials have said the collection includes unique ensembles of diamonds that are of priceless art-historic value, declining to give a financial value.

Even as the scale of the loss became clear, some good news emerged: The thieves weren’t able to rip out all of the jewelry, some of which was sewn onto fabric lining the display cases. And one of the museum’s best-known treasures, the 41-carat Dresden Green Diamond, is on loan to New York’s Metropolitan Museum of Art.