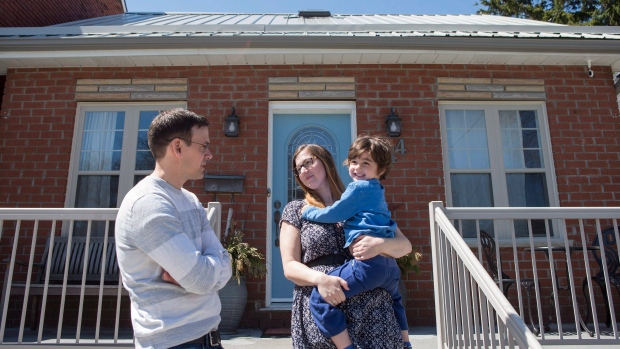 Sarah Blakely and her husband Curtis sold their three-bedroom home in Toronto for more than $1M , The Canadian Press/Chris Young

Sarah Blakely recalls feeling some trepidation when she and her husband shelled out more than $300,000 for a modest one-and-a-half-storey house in a less-desirable part of Toronto.

Seven years later, they found themselves on the right side of a hot housing market, with values tripling in a neighbourhood suddenly considered up-and-coming for young families seeking detached homes.

They recently sold that renovated three-bedroom for more than $1 million and now expect to live mortgage-free in a four-bedroom purchase in their hometown of Ottawa.

The 34-year-old says it made sense to cash out of a city that was draining their finances, energy and family time.

"My husband and I saw an opportunity to take advantage of the recent gains in real estate and to move to a less expensive city to live mortgage-free, support our savings for retirement and also to be closer to family," says Blakely, whose new home has nearly twice the square footage.

And they may have taken action at just the right time.

"A little bit of air has been let out of the bubble," she says.

Many buyers and sellers are waiting to see what will come of Tuesday's scheduled meeting between Finance Minister Bill Morneau, Ontario Finance Minister Charles Sousa and Toronto Mayor John Tory, who are expected to discuss ways to rein in Toronto's hot housing market.

Stern says some buyers are delaying their purchase in anticipation of possible fixes.

"Buyers have been in such a stressful situation for so long that now they think somebody is going to save them and they're waiting," says Stern. "They've dug their heels in, they're tired of competition and then there's those that are still proceeding, but there's been quite a big pullback from buyers."

Sellers who've bought new homes are rushing to list their old property, she adds, but many are not getting the high bids seen a month ago.

The Toronto market has been astonishing, with the average sale in the Greater Toronto Area skyrocketing last month to $916,567. That's up 33.2 per cent from a year ago.

With strong demand and limited supply, it wasn't uncommon for bidding wars to result in sales hundreds of thousands of dollars above asking. And a lot of those sellers took those dollars out of the Greater Toronto Area where they can get more acreage, less congestion and still pocket a fair bit of cash.

"We're finding that a lot of people are leaving the city," says Stern, who estimates that about a third of her 35 sales this year involved sellers either downsizing to condos or moving to more affordable markets.

"It's empty-nesters, it's [couples with] babies, it's all kinds of people that are doing this."

Even with a new uncertainty in the air, it's still a seller's market, she adds.

One of her biggest sales was a $2-million listing that went $575,000 over asking in February. The sellers moved to the commuter city of Burlington, Ont.

They're joining buyers priced out of the Toronto market who have gone looking for cheaper housing in smaller communities across the Golden Horseshoe, spurring other sales spikes in the region -- Hamilton-Burlington homes jumped 22.6 per cent during the first two months of 2017 compared to a year earlier.

Nova Scotia sellers are taking notice, and are marketing to out-of-province buyers now considered increasingly likely to make an offer.

"They know that there are buyers out there and now it's, 'How do we reach them?"' says Graves.

Before selling for $455,000, the mansion in Newport Landing, N.S., drew more than one million views on her company's website and 36,000 shares on Facebook.

But that changed after the B.C. government introduced a 15 per cent foreign buyers' tax last summer, which Wu says especially soured interest in west Vancouver luxury homes priced at more than $4 million.

Detached homes in the $1-million to $2-million range in east Vancouver are doing well and still notching close to record highs, says Wu.

Her recent sales included a $2-million get for a century-old home owned by a retired couple. Their plan is to downsize to an older condo costing less than $500,000. The rest of the proceeds will go to their kids and retirement fund.

She says the sale was a record high for the neighbourhood, but it took an agonizing three weeks to secure — longer than it would have last year, she says.

She advises Toronto homeowners thinking of selling to take advantage while they can.

"There's always a shift coming in," she says of this hot market. "Sell before it corrects."

Stern would like to see a crackdown on real estate speculators in Toronto, citing one buyer who bought 15 properties in the last two years.

And she cautions those tempted to cash out that there's always a risk the market won't co-operate.

"People have been asking themselves that question since the year 2000: Should I sell? Should I cash out?

"And there have been people who have cashed out and have regretted it because they've seen what the market has [done] — they've never been able to rebuy the houses that they've sold."