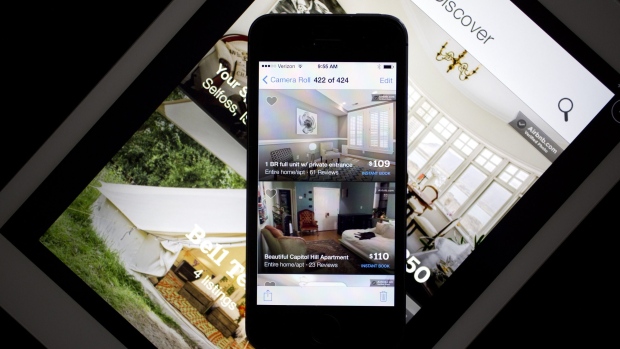 Airbnb Inc. reported tumbling revenue and mounting losses in the second quarter, but the home-sharing startup is still eyeing a stock market debut before year’s end, according to people familiar with the matter.

Revenue fell to US$335 million in the period ending June 30, said the people, who didn’t want to be named discussing private information. That’s down at least 67 per cent from the more than US$1 billion the company reported in the same period last year, a shift that reflects the magnitude of the impact of the coronavirus pandemic on global travel. It’s also a steep decline from the US$842 million in sales in the first quarter, according to financial information viewed by Bloomberg.

Airbnb recorded a loss before interest, taxes, depreciation and amortization of US$400 million in the second quarter, the people said. The company did start to see some signs of recovery at the tail end of the period, with bookings down 30% in June from a year earlier, compared with a 70 per cent decline in May, year over year, the people said. The company reported an adjusted loss of US$341 million in the first quarter, compared with a loss of US$292 million a year earlier.

Airbnb had been one of the most highly anticipated stock listings of this year. Chief Executive Officer Brian Chesky had originally intended to initiate the listing process with the U.S. Securities and Exchange Commission on March 31. That was before Covid-19 closed borders, ground flights to a halt and left the company with more than US$1 billion in cancellations. With the markets in turmoil, plans were put on hold.

Since then, however, travel has rebounded as cities reopen and people seek refuge in rural locals where they can take advantage of work from home policies. Airbnb saw more nights booked for U.S. listings between May 17 and June 3 than the same period in 2019, and a similar boost in domestic travel globally. The company plans to file paperwork to go public in the next few weeks, paving the way for its shares to be trading as soon as the fourth quarter, people familiar with the plans have said.