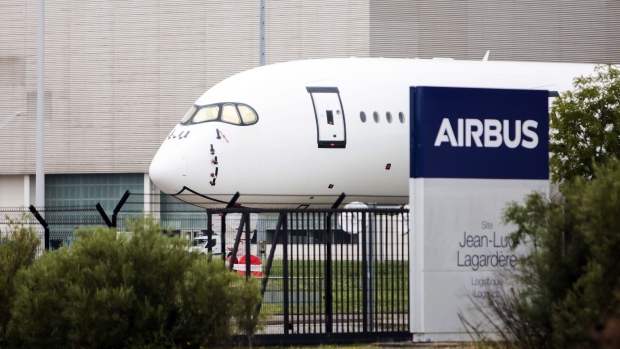 An unbranded Airbus A350 passenger aircraft outside the Airbus SE factory in Toulouse, France, on Wednesday, July 28, 2021. Airbus reports half year earnings on July 29. , Bloomberg

(Bloomberg) -- Airbus SE is on track to meet its 600-jet delivery goal for 2021, according to people familiar with the situation, though holdups with the handover of some wide-body aircraft have complicated the issue.

As of mid-December the European planemaker had shipped around half of the 82 jets it must deliver this month to meet the full-year goal, according to one of the people, who asked not to be named discussing production matters.

The push has been hindered by snags involving completed twin-aisle A350s not yet accepted by airlines. Russia’s Aeroflot PJSC postponed the handover of two because traffic levels aren’t sufficient, a spokesman said, while some China-bound planes are said to be on hold and may ship in coming days. Ethiopian Airlines Group said it will take two jets this month under a revised plan.

Airbus faces what’s become an annual scramble to accelerate build rates in order to meet one of its main metrics, though this year the push may be especially challenging as suppliers struggle to lift parts production after shuttering factories at the height of the coronavirus crisis. Some airline customers have also pushed back deliveries to preserve cash while they await a recovery in long-haul travel demand.

An Airbus spokesman declined to comment on the Toulouse, France-based company’s industrial planning or customer delivery dates, adding that “deliveries are not linear and the year is not over yet.”

Sanford C. Bernstein analyst Doug Harned said in a note last week that based on production and handover rates, Airbus likely had around 150 jets finished or close to finished at the end of last month, 50% more than suggested by Airbus weeks earlier.

While that might include some planes missing a small part due to the supply-chain squeeze which will be delivered once complete, it could also indicate a significant level of reluctance among airlines to boost capacity with the coronavirus pandemic still raging.

Aeroflot said it postponed the A350 handovers by two or three months due to the lack of demand, while Ethiopian said it will take receipt of its planes according to a plan renegotiated with Airbus. Authorities in China couldn’t be reached for comment on potential delays there.