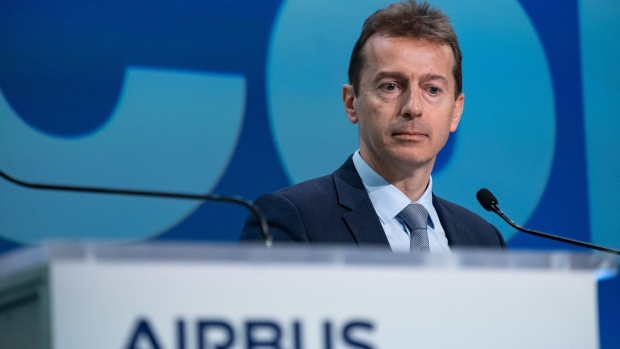 (Bloomberg) -- Airbus SE is poised to make its biggest job cuts ever, as the European planemaker scales back operations to match an unprecedented downturn in demand caused by the coronavirus.

The company plans to disclose the number of positions to be lost in a restructuring plan as soon as Tuesday evening after meeting with unions, according to a person familiar with the matter. Airbus is likely to eliminate more than 10,000 posts, the person said.

Airbus has been fine-tuning a plan to cut costs since slashing its output by a third in April, after the virus grounded global air traffic. Chief Executive Officer Guillaume Faury has prioritized voluntary measures -- in part to limit the backlash in France and Germany, its biggest owners, which have doled out billions in aviation industry aid -- that won’t generate savings needed to get through a prolonged downturn, the person said Monday.

“Airbus has taken its time, has doubtless weighed the long-term versus the short-term, but cannot change the reality of deliveries being around one-third lower than in 2019 for several years,” said Sandy Morris, an analyst with Jefferies.

Airbus won’t want to hollow out its R&D capability and it must maintain customer service levels, “but even if you take 20% it isn’t a nice number,” Morris said.

Airbus has about 135,000 employees globally, with almost 81,000 of those in the hard-hit commercial aviation division. The job cuts will also affect its its helicopters and defense units, the person said.

U.S. rival Boeing Co. plans to cut 10% of its workforce -- or about 16,000 jobs -- to shrink operations. The manufacturer has been harder hit than Airbus by cancellations as the coronavirus added to its already existing issues with the 737 Max plane, though both acknowledge the need to shrink to get through the sharpest contraction in aviation history.

Faury has previously warned that Airbus will face “heart-wrenching” decisions as it seeks to survive the crisis. The task is complicated by political sensitivities in its home nations of France and Germany.

Airbus’s executive committee will meet with the company’s board on Tuesday, according to a union official. That will be followed by a meeting with labor leaders to discuss its overall plans.

On Wednesday, the executive committee will hold another meeting with unions to lay out how the measures will affect specific areas of the business.

The CFDT union said it planned to oppose any layoffs and encourage the company to use measures such as part-time work or early retirements. “Today the management will announce their intentions, then discussions will continue,” union representative Michel Pierre said.

Airbus declined to comment on speculation related to internal meetings.