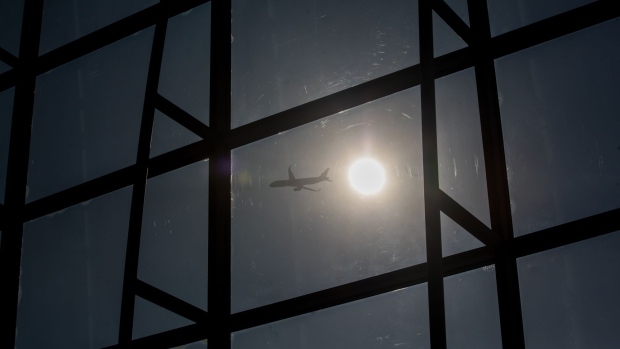 An aircraft is silhouetted as it flies. Photographer: Paul Yeung/Bloomberg , Bloomberg

The five-year study by the Institut de Radioprotection et de Surete Nucleaire found that while the number of crew receiving annual exposure above a specific safety limit remains relatively tiny, the proportion doubled between 2016 and 2019. The government agency recommended rotating staff more frequently away from the most-affected routes.

Airline crews are more exposed than people on the ground to radiation from cosmic rays, which are blocked by the atmosphere. As carriers connect farther-flung cities and use polar routes to save time and fuel, pilot unions and health experts have begun raising safety concerns about higher radiation exposure.

Levels affecting pilots and cabin crew should be closely monitored, and they “should be considered exposed workers,” the report concluded.

According to the IRSN, exposure to these cosmic rays is about 150 times more potent at 10 kilometers (6.2 miles) above ground than at sea level, and is two or three times higher at the poles than the equator.

The IRSN study on airlines was part of an annual report published Wednesday on radiation in the workplace. The institute studied exposure of an average of 22,000 crew members working for unnamed carriers. Their total annual dose rose 38% between 2015 and 2019, and the average individual doses “increased steadily.”

Before 2015, most of the 100 employees receiving the highest annual doses were cabin crew, but by 2019 there was an equal split with pilots, who tend to specialize in one type of plane and route.

More than three-quarters of the pilots who received an annual dose of more than 5 milliSieverts (mSv) were flying wide-body planes on long-haul routes to North America and Asia, the study found. The most highly exposed flight attendants were also on these types of routes.  A measure of 5 mSv represents a quarter of the maximum of 20 per year permitted by France for workers and is a level that the IRSN considers to be significant.

High levels of radiation can damage cells and could lead to cancer in later life. The French study found that 96 crew members had exposure of between 5 to 10 mSv in 2019. A CT scan of someone’s head equates to about 2 mSv.

The French pilot union is calling for better technology in planes to detect solar flares, which lead to higher radiation, so they can limit the danger by flying at lower altitudes or changing routes.