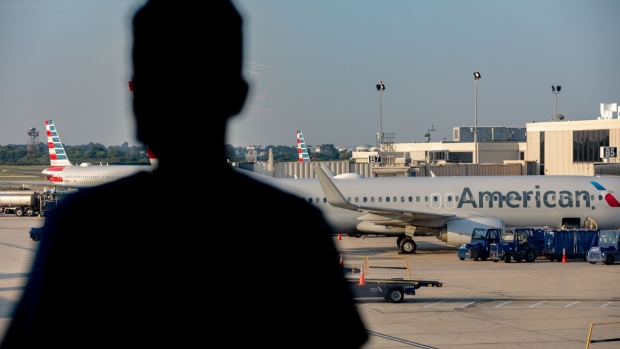 American Airlines planes at a gate of Philadelphia International Airport (PHL) in Philadelphia, Pennsylvania, U.S., on Friday, Aug. 6, 2021. Citing a surge in unruly passengers, U.S. aviation regulators are calling on the nation's airports to encourage the police to arrest offenders, and to prevent people from sneaking alcohol on board. Photographer: Hannah Beier/Bloomberg , Bloomberg

(Bloomberg) -- A new air-traffic computer tool that untangles congested airport taxiways saved hundreds of thousands of gallons of fuel during tests and is expected to be installed across major U.S. airports starting next year.

The Federal Aviation Administration plans to add the system at 27 busy hubs in coming years, the agency said Tuesday in a joint announcement with NASA, which helped develop the technology.

“The future of flight must be more sustainable and environmentally friendly,” FAA Administrator Steve Dickson, a former airline pilot, said in the release. “This new capability has a double benefit: It reduces aircraft emissions and ensures air travelers experience more on-time departures.”

The Terminal Flight Data Manager is designed to address the significant portion of flight delays that occur on the ground as airliners line up to depart from busy airports, often waiting for significant periods of time while engines inefficiently idle.

Instead of allowing planes to depart from airport gates on a first-come, first-served basis, the new system will instruct controllers when individual planes should push back. The goal is to have the shortest runway cue possible, allowing for efficient use of busy runways while minimizing the time that planes must wait.

The system -- which operates by merging data from airlines, airports and air-traffic systems -- has been tested at Charlotte Douglas International and Dallas/Fort Worth International.

The tests in Charlotte, North Carolina, which is a major hub for American Airlines Group Inc., reduced taxi times and saved more than 275,000 gallons (1,041,000 liters) of jet fuel annually, according to FAA. The agency estimated it resulted in a reduction of eight tons a day in carbon emissions.

Airports scheduled to get the system include all of the biggest U.S. facilities, including Atlanta Hartsfield-Jackson, Chicago O’Hare and all three of New York City’s: John F. Kennedy, LaGuardia and Newark Liberty.