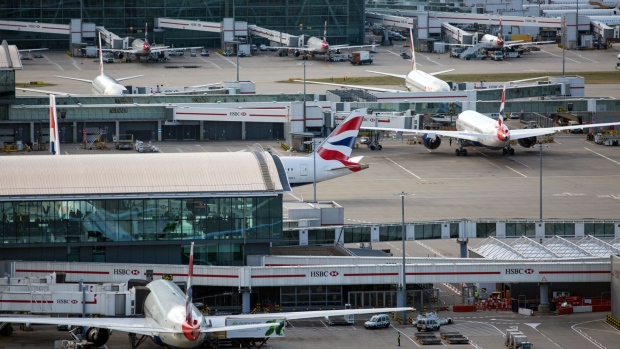 LONDON, ENGLAND - OCTOBER 11: A general view of Terminal 5 of Heathrow Airport on October 11, 2016 in London, England. The UK government has said it will announce a decision on airport expansion soon. Proposals include either a third runway at Heathrow, an extension of a runway at the airport or a new runway at Gatwick Airport. (Photo by Jack Taylor/Getty Images) , Photographer: Jack Taylor/Getty Images Europe

(Bloomberg) -- Major airports in Europe are asking investors for a break from debt obligations for the second time since the height of the coronavirus pandemic.

London Heathrow Airport, the U.K.’s busiest hub, said it secured support for a new round of waivers on covenants applying to $1.6 billion of bonds after some of the terms agreed last year expired. Holders of $730 million of bonds issued by Brussels Airport are set to discuss extending similar waivers or risk a default.

The requests come as variant strains and rising cases dim the recovery outlook for the travel industry. More than 16 months after Covid-19 was declared a pandemic by the World Health Organization, obstacles to traveling abroad continue to deplete passenger numbers.

“Companies underestimated how much below expectations traffic figures can be and how long it would take to relax restrictions,” said Mariya Nurgaziyeva, a London-based airports analyst at research firm CreditSights, Inc. “Their initial forecasts back in the summer of 2020 were that the pandemic would subside after the first few months.”

London’s three major airports and Belgium’s hub all secured one-year waivers last summer, when lockdowns prevented them from abiding by certain covenants. Investors are agreeing to relax some protections again as airports and analysts reduce guidance.

Heathrow secured outline backing from 77% of creditors for a waiver of its interest cover ratio covenant for 2021, Chief Financial Officer Javier Echave said in phone interview on Monday. That more than covers the two-thirds required for approval of waiver, which is precautionary in light of continued uncertainty over passenger numbers, he said.

“We have already had to adjust our forecasts for this year several times,” said Nathalie Pierard, a spokeswoman at Brussels Airport. “The first half of the year was worse than we had imagined.”

Various travel restrictions that can be changed at short notice create uncertainty for the industry, according to a Heathrow spokesman.

Still, some airlines are betting on a recovery. Ryanair Holdings Plc plans to pump more capacity into European markets to overpower rivals when travel rebounds, even after reporting a loss on Monday.

While bondholders generally have little reason to give away protections, they can’t do much as a rebound in traffic is out of the travel industry’s hands, according to CreditSights’ Nurgaziyeva.

“I don’t think it makes sense for investors to aggressively push back now,” she said.