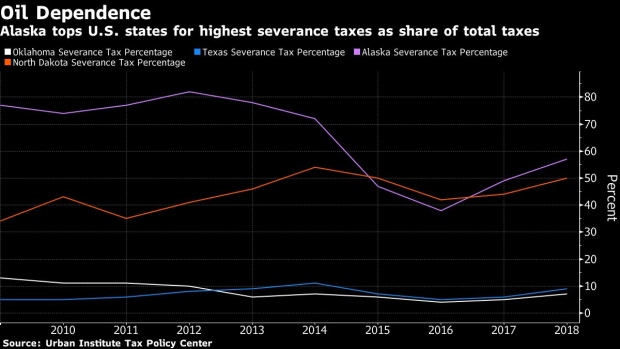 (Bloomberg) -- U.S. states that are highly dependent on oil to fund their budgets are bracing for the impact of price war launched this week on the other side of the globe.

Alaska, which gets about 70% of its operating income from the oil and gas industry, suspended most out-of-state travel and froze hiring as budget officials run models to figure out how much they may need to cut spending in a prolonged period of low prices. The state budget assumes $59-per barrel in the coming fiscal year based on an oil price futures curve. But crude plummeted by about 25% on Monday alone and is hovering around $31.

“They certainly don’t have a lot of economic diversity,” said Nick Samuels, a senior credit officer at Moody’s Investors Service.

The last time oil plunged so much, in a two-year rout that began in 2014, the impact cascaded across energy-dependent regions of the U.S that had outperformed during the Great Recession. By late 2016, Houston had lost 55,000 jobs in oil production, manufacturing and scientific and technical services. Oklahoma bled 37,300 jobs. Lafayette, Louisiana, the nation’s fourth most mining-dependent metro area, posted the largest over-the-year decrease in employment in the U.S.

Oil tumbled the most since 1991 on Monday, after talks between Saudi Arabia and Russia broke down, with both sides vowing to flood the market. That added to the global market turmoil already caused by the coronavirus epidemic.

Since 2014 Alaska has been hit with credit-rating downgrades as its revenue cratered and economy shrank. Its unemployment rate is still the highest of any state. Lawmakers were forced to reduce the oil-dividend checks given to residents to help close budget deficits, sending the payments in 2016 down 50% to $1,022 per person.

“The drop in oil prices, if sustained, will definitely have an impact on the state’s budget,” Jeff Turner, a spokesman for governor Mike Dunleavy, said in a statement, adding that officials expect to have a better idea of the impact by the end of March. “We hope the current volatility will at least partially subside by then.”

Oil-dependent states that suffered in the last rout have since sought to insulate their budgets from swings in the volatile market. North Dakota, Oklahoma, Texas and others that were “hit hard” during the last drop have built up reserve accounts and rely on more diverse revenue sources, said Lucy Dadayan, a senior research associate at the Tax Policy Center.

In North Dakota, where state officials assumed a local price of about $48 per barrel in the most recent budget projection, is expecting to see its rainy day fund reach a record $726 million, or 15% of general spending by the end of the March, giving it room to deal with the drop, said Joe Morrissette, the director of the state office of management and budget.

Still, “We are hugely reliant on oil taxes,” he said.

Oklahoma’s proposed budget built in a forecast of $55.57 per barrel. The last oil crash cut funding for education so much that schools were forced into four-day weeks, which led to teacher protests. This time, Oklahoma has new sources of revenue from higher motor fuel, cigarette and oil and gas production taxes, along with reserve account levels that are the highest in its history, according to the governor’s office.

Texas is also much less reliant on oil and gas revenue than it has been historically, though it is still monitoring the developments, said comptroller Glenn Hegar.

Alaska, on the other hand, expects to deplete one reserve account by the end of fiscal 2021, meaning it would have burned through $16 billion in less than a decade, based on its current per-barrel price projections, according to budget documents.

The Permanent Fund is a second reserve account that will give it room to maneuver by drawing on investment earnings. Alaska has been tapping that account for the past two years, but also relies on it to finance the annual oil dividend checks to residents.

“Alaska is the state most reliant on oil-related revenue as part of its budget,” said Timothy Little, director of U.S. public finance at S&P Global Ratings. “If low oil prices persist, it is likely to have a negative effect.”

--With assistance from Danielle Moran and Martin Z. Braun.

To contact the editors responsible for this story: Elizabeth Campbell at ecampbell14@bloomberg.net, Michael B. Marois, William Selway