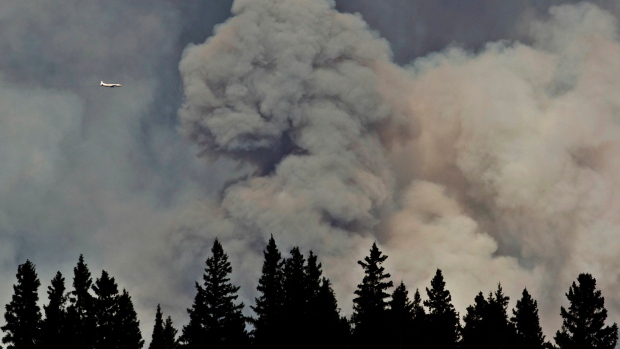 A plane surveys the area near a wildfire in Fort McMurray , The Canadian Press

FORT MCMURRAY, Alta. -- Alberta says it will spend $45 million over the next three years to help protect communities in forested areas from being damaged by wildfires.

Forestry Minister Oneil Carlier says the increased funding will be available to municipalities that want to set up a FireSmart strategy that includes clearing trees and brush from communities, homes and buildings and encourages homeowners to use fire-resistant roofing and siding materials.

FireSmart also helps communities develop an emergency plan that can be used if there is a serious wildfire and raises awareness about where homes and buildings should be built.

"People are going to be encouraged now because of what they saw last year," he said in an interview Thursday.

"Communities have that in the back of their minds. They don't want to have their own communities to have a disaster like Fort McMurray."

Carlier made the announcement in the northern Alberta city, which is still recovering from a raging fire last May that forced more than 80,000 people to flee.

The wildfire destroyed more than 2,400 homes and other buildings and had an estimated financial impact of almost $8.6 billion.

"It is really important to encourage communities to take advantage of this extra funding to do all they can to make their own communities, their own homeowners, much more resilient to wildfires," Carlier said.

"The past few years have shown us that we need to do everything we can to help reduce the risk."

Carlier said the $15 million annually is an increase from $3.8 million that was spent on the program last year.

The increased funding includes money for fire prevention in the Fort McMurray area.

The Fort McMurray blaze became known as "the beast" and was the second wildfire disaster to hit Alberta in recent years. In May 2011, thousands of people were forced from the town of Slave Lake as flames torched more than 500 homes and buildings at an estimated cost of about $1 billion.

Since then, 95 communities in the province have signed up to take part in FireSmart at a cost of about $35 million.

The FireSmart guide warns that more people are living and working in forested areas and "many communities currently face a high to extreme wildfire risk."