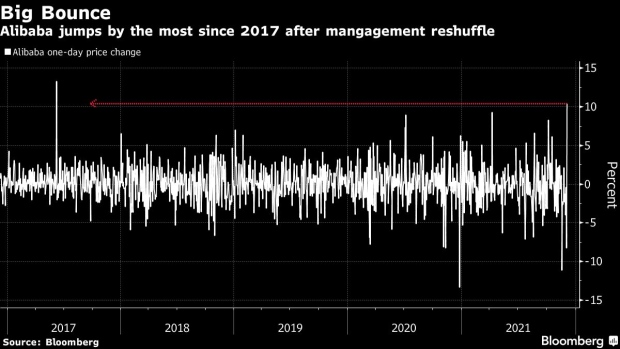 (Bloomberg) -- Alibaba Group Holding Ltd. jumped on Monday, leading a rebound in Chinese tech firms listed in the U.S., after the company announced a management shakeup and policy makers in Beijing stepped up support for the nation’s economy.

American depositary receipts for the Chinese tech giant rallied 10.4%, the most since June 2017. The gain follows news that long-standing chief financial officer Maggie Wu will be replaced in April by Toby Xu, who joined the firm from PricewaterhouseCoopers LLP three years ago. Meanwhile, the People’s Bank of China said it will reduce most banks’ reserve requirement ratio by 0.5 percentage point next week.

“The RRR cut from China signaled to Wall Street that Beijing is getting nervous about the outlook and that maybe the tech crackdown could be nearing its end,” said Ed Moya, senior market analyst at Oanda.

The changes come in the wake of what has been a tumultuous year for the company and more broadly, for Chinese stocks listed in the U.S. Shares of the Hangzhou-based firm have plunged 47% so far this year amid a wide-ranging corporate crackdown by regulators in Beijing and the threat of a forced delisting by the U.S. Securities and Exchange Commission.

While Monday’s rally helped add about $32 billion back to Alibaba’s market capitalization, the recovery is small compared to the more than $500 billion the stock lost since reaching a record high late last year. Analysts remain bullish on Alibaba’s long-term prospects, with more than 90% giving it a buy rating, according to data compiled by Bloomberg.

Wu will remain in the Alibaba Partnership and serve as executive director on the internet giant’s board, according to a company statement. Separately, Alibaba is creating two Digital Commerce teams, one for international markets, led by Jiang Fan, and another for the domestic market, to be headed up by Trudy Dai, the company said in a blog post.